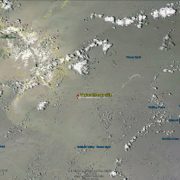 Ah. So this must be the Responsible Modern Offshore Drilling we’ve all been hearing so much about.  In magazines. In the newspapers. On the radio. On TV. On social media. Pretty much everywhere you look.

Except in real life.

MODIS satellite imagery taken Tuesday (June 18, 2013) shows a slick 32 miles long emanating from the Taylor Energy site, which has been reliably oozing oil into the Gulf for more than 8 years now. Strangely, there appears to be no action from the responsible party, industry, state or federal authorities to bring this ongoing travesty to a close. It’s likely this chronic leak has been generating tarballs that have been coming ashore on the Louisiana coast for years, well before the catastrophic 2010 BP  / Deepwater Horizon spill.

Maybe the powers that be in Louisiana and in Congress have decided to look the other way and keep their mouths shut, while the oil and gas industry spends hundreds of million of dollars per year on advertising and lobbying to convince the American people that oil and gas production is squeaky-clean and risk-free. Maybe it’s time to spend those millions to clean up the real-life problems, instead of trying to convince us that they don’t exist, because the Gulf Monitoring Consortium and others are working hard to ensure this stuff can no longer be hidden from public view.

Why not start here?  Eventually the people of Virginia and North and South Carolina who are being wooed by the promises of offshore drilling jobs and cash might begin to pay attention to industry’s inaction and politician’s lack of concern here in the Gulf.  They just might have second thoughts about drilling when they imagine a Taylor-like scenario unfolding in their waters, and a steady stream of tarballs washing ashore for years in Virginia Beach, or Nag’s Head, or Myrtle Beach.