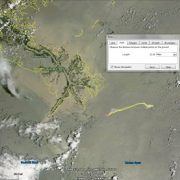 We here at SkyTruth actually look forward to the day when we can look at satellite images from the Gulf of Mexico and NOT see any human-caused oil slicks. Yesterday, unfortunately, was not that day. Quite the contrary, on yesterday’s MODIS Terra image we can plainly see another slick emanating from Taylor Energy’s site 23051. We’ve done tons of blog posts on this chronically leaking site, and sadly, we will probably do many more until Taylor or their partners gets this thing fixed.

But here’s the kicker. According to our measuring tool in Google Earth, we see that the slick is approximately 22 miles long:

Yet Taylor’s required daily report to the National Response Center (NRC) for June 17th states there was a visible slick only 10 miles in length a few hours earlier. Assuming their description of the slick is correct, and assuming an average slick thickness of 1 micron (1/1000th of a millimeter), that represents a total volume of almost 65 gallons. But that’s 45 times more oil than Taylor reported for this slick – Taylor reported a spill volume of a mere 1.43 gallons.

As we reported in our blog of Monday, June 3, NOAA has begun to look at satellite images of the Taylor area and reporting what they see. Their report to the NRC from yesterday states pretty much what we see on this MODIS image, a slick extending east from the site for a distance of 39km (24 miles). NOAA also reports the slick covers 88km2 (we measure it to be about 56km2).  Applying our “rule of thumb” assumption that the slick must have an average thickness of at least 1 micron, that amounts to a volume of 264 gallons per km2 — in this case between 14,784 and 23,232 gallons of oil on the water on June 17. That’s 10,000 to 16,000 times larger than Taylor’s official estimate of 1.43 gallons.

These wells have been leaking for almost nine years.  Why aren’t Louisiana’s politicians hopping mad about this?

Chronic Oil Spill in the Gulf of Mexico Since 2004 – Still Spillin...

Responsible Modern Offshore Drilling. Except When It Isn’t.
Scroll to top