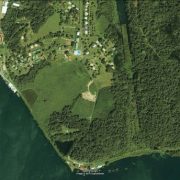 It’s not just a quaint anagram. In this age of relentlessly expanding global commerce, Panama has been planning ahead, and is investing billions of dollars in supersizing the canal (photo gallery here) to allow the passage of the new breed of supersized cargo ships.  Even more coal mined from Appalachian mountains and Montana/Wyoming prairies — and possibly natural gas extracted from shale by hydraulic fracturing — will likely be shipped to Asia and other markets once this expansion work is completed.

The global warming-driven decline in Arctic sea ice might divert some of the cargo traffic Panama is counting on to pay for this expansion, if the Northwest Passage becomes a viable trade route. So in a bit of irony, by feeding the world’s addiction to fossil fuels, Panama may be undercutting its business plan.  Just sayin.

Here are a couple of images from Google Earth showing the area around the Caribbean end of the Panama Canal near the Gatun Locks, as it appeared in 2005 and with the expansion project well underway in 2012.

95-Mile-Long Slick in the Gulf of Mexico?
Scroll to top
SkyTruth and/or its third party tools use cookies to monitor traffic in the aggregate on our websites and applications and to improve user experience. If you continue browsing, we'll assume you agree to the use of cookies. You can change your cookie settings at any time in your browser settings. Find out more in our privacy policy.