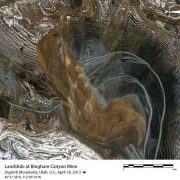 The spectacular landslide that shook the earth at the Bingham Canyon copper-gold mine in Utah on April 10 has been captured in an equally spectacular high-resolution satellite image taken on April 18.  The image below is a humble reduced-resolution version; to see the real thing in all it’s lovely detail, check out this week’s WorldView Report from DigitalGlobe:

This issue of WorldView also has an image of the fertilizer facility — and surrounding neighborhood — near Waco, Texas that was leveled in a deadly explosion, caught here on a cell-phone video.  Watch this in full-screen mode to get a feel for how catastrophic this was — and maybe a new appreciation for the lifesaving value of good zoning laws.

A Fragmented Divide? Simulating Gas Development in the Thompson Divide
Scroll to top
SkyTruth and/or its third party tools use cookies to monitor traffic in the aggregate on our websites and applications and to improve user experience. If you continue browsing, we'll assume you agree to the use of cookies. You can change your cookie settings at any time in your browser settings. Find out more in our privacy policy.