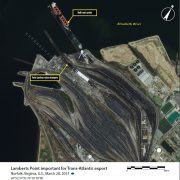 Every couple of weeks or so, the folks at DigitalGlobe/Geoeye publish a newsletter featuring various examples of recent high-resolution satellite imagery from around the world.  This is always an interesting, and often jaw-dropping, little publication to look through.  Among other things the latest edition features stunning imagery of Egyptian temples and offshore oil platforms, the Kaesong Industrial Complex in North Korea, and this massive coal-export terminal near Norfolk,Virginia:

As the market for coal-fired electricity generation here in North America shrinks due to the rise of cheap natural gas-fired power (thanks to fracking for shale-gas), exports of coal from the US to overseas markets in Europe and Asia are sharply increasing.  This booming export market is propping up the continued destruction of Appalachian mountains by mountaintop removal mining. It’s also fueling a rash of coal-train derailments impacting health and safety in communities across the nation, some far removed from the coal-mining areas and the export terminals.

As if we needed more reasons to reduce our crippling dependence on fossil fuels.

Panama Canal Getting Bigger. Much Bigger.
Scroll to top
SkyTruth and/or its third party tools use cookies to monitor traffic in the aggregate on our websites and applications and to improve user experience. If you continue browsing, we'll assume you agree to the use of cookies. You can change your cookie settings at any time in your browser settings. Find out more in our privacy policy.