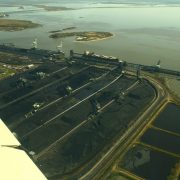 On March 24 staff from Gulf Monitoring Consortium members SkyTruth, SouthWings, and Gulf Restoration Network flew over the Alabama and Mississippi coastline investigating pollution and degradation related to energy development. Our flight originated from Mobile, arranged by SouthWings with local volunteer pilot Dr. David Mauritson generously donating his time, talents, and fuel to our monitoring efforts.First, we flew over the Port of Mobile which dominated the landscape immediately after takeoff from the Brookley Aeroplex. The port boasts the McDuffie Coal Terminal, one of the nation’s largest coal import-export terminals. In addition to several smaller facilities nearby, McDuffie can handle a staggering 30 million tons of coal in a year, but in the past year  they processed *just* 13.9 million tons – only 46% of capacity. These numbers are of interest because of the intensifying debate over coal export.  With cheap natural gas flooding the market from fracking plays like the Marcellus Shale, there is growing pressure to sell American coal overseas to foreign markets – particularly Asia and Europe.

Only  one vessel was loading coal at the time of our flight, the Panama-flagged Grand Diva. This operation was depositing a black plume of coal dust in the water.

As an individual case, this may not result in a significant impact on the environment.  But a brief review of Google Earth’s historical imagery yields two previous events clearly showing coal in the water, and several other less-clear images that appear to show pollution, suggesting this is a common event that may result in significant cumulative impact.

Air pollution is another consideration. Chronic coal-dust blowing off the stockpiles at a coal terminal are the basis of a Clean Water Act lawsuit in Seward, Alaska, and one of the main arguments throughout the Pacific Northwest against expanding coal export terminals to move more Powder River Basin coal from Wyoming to Asian markets.  This is only one step along the way from mine to market – coal trains derail far more often than you might think (in North Dakota, Michigan, and Nebraska, just this past month), loaded barges crash into bridges (just this week), terminals flood when severe storms come through, and ships even crash into the loading docks. Not counting carbon emissions from burning the coal, scientists, environmentalists, and concerned citizens along coal transport routes are worried that these cumulative impacts will harm public health, disrupt their daily lives, and negatively impact the ecological health of waterways along the path from mine to port.

More to come including a leaky settling pond, an oil slick off Gulfport, and severe erosion resulting from ill-conceived oil spill response practices on Dauphin Island. Be sure to check out the photos of the whole flight on Flickr. 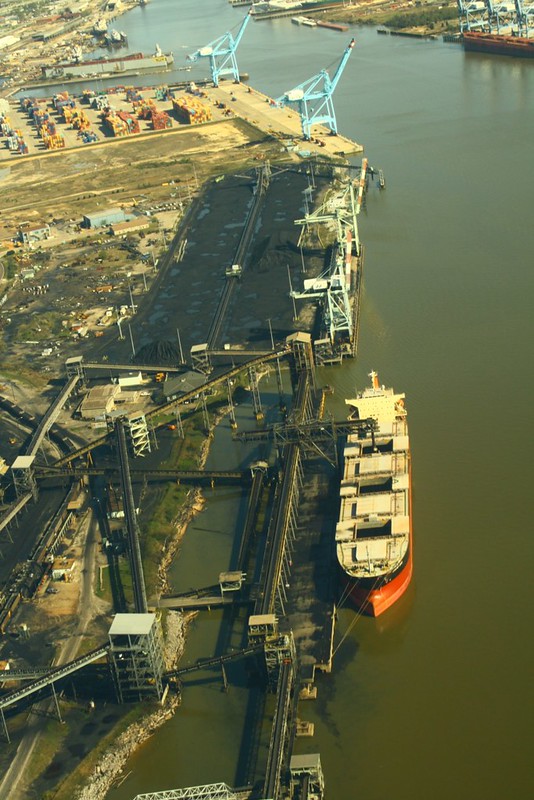 Landslide at Bingham Canyon Mine – Satellite Image
Scroll to top
SkyTruth and/or its third party tools use cookies to monitor traffic in the aggregate on our websites and applications and to improve user experience. If you continue browsing, we'll assume you agree to the use of cookies. You can change your cookie settings at any time in your browser settings. Find out more in our privacy policy.