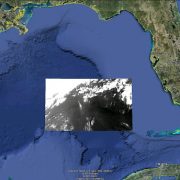 That sounds like bilge-dumping from a passing vessel — an activity that is illegal in US waters (and much of the rest of the world).   Intrepid SkyTruth intern Patrick busted somebody for bilge-dumping off Angola last year using satellite radar imagery and AIS data.  The report was submitted to the Coast Guard-operated National Response Center by image analysts at NOAA.  We’re thrilled that they’ve started reporting their analyses of possible pollution incidents to the NRC, so we can easily incorporate them into our Alerts system.  (We like to think our Gulf Monitoring Consortium activity helped spur NOAA to get their experts into the game in a more public way.)

NOAA’s analysts now think it’s probably not oil; more likely it’s natural surfactant caught in the convergence zone between two water masses.  I agree; this is close to the edge of a loop current now in the northeastern part of the Gulf.  And bilge-dump slicks usually look a lot sharper than this (see a slideshow of our examples from radar imagery).

Here’s detail from a MODIS/Terra satellite image taken at 16:50 UTC on April 14, 2013, showing the apparent slick.

Panama Canal Getting Bigger. Much Bigger.

Landslide at Bingham Canyon Mine, Utah
Scroll to top
SkyTruth and/or its third party tools use cookies to monitor traffic in the aggregate on our websites and applications and to improve user experience. If you continue browsing, we'll assume you agree to the use of cookies. You can change your cookie settings at any time in your browser settings. Find out more in our privacy policy.