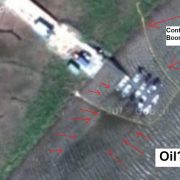 Tip o’ the hat to blogger Michael Cote, who was scrutinizing the imagery in Google Maps around the ConocoPhillips “Alpine”oil field on the North Slope (we like to know we’re not the only ones who think this is a fun thing to do).  He saw something unusual that he thought might be a small, unreported oil spill, and wrote about it on his blog.  Now he’s learned more and thinks it’s probably not an oil spill, but since this has gotten lots of attention online, I thought you’d like to see it and get our take:

The Google imagery at this location is a high-resolution DigitalGlobe satellite image shot in July 2012.  I can’t say with any certainty if the dark smudge in the water is, or isn’t, oil. Michael says a ConocoPhillips spokesman told him it was a “shadow from the river bottom” which is very unlikely (Alaskan rivers are typically very silt-laden and opaque; this river appears typical in that regard, so I doubt we’re actually seeing the river bottom).  Whatever it is, it’s a very small feature, about 150 feet long.

I think this dark patch is most likely wind shadow: a calm patch of water on the downwind side of a topographic (or human-made) obstruction that appears darker than surrounding, wind-rippled, sun-glinty water. Moving upstream and downstream, you encounter many dark streaks and patches on the river that indicate a strong, uniform wind blowing from the northeast.  But oilfield infrastructure is often grimy and oily, and it wouldn’t be surprising if there was some light oily sheen emanating from this infrastructure and enhancing the water-flattening effect of wind shadow on the downwind side of this facility.

Nevertheless, it’s great to see people using these tools to adopt a patch of planet Earth to watch over, and investigate things for themselves.  If you feel like trying a bit of skytruthing, check out the imagery in Google Maps and Google Earth — and the millions of free Landsat satellite images, while you’re at it! — and let us know if you see something interesting, something mysterious, something you’d like us to take a look at!

Support FOIA-Matic: A Tool for Pollution Response Transparency
Scroll to top
SkyTruth and/or its third party tools use cookies to monitor traffic in the aggregate on our websites and applications and to improve user experience. If you continue browsing, we'll assume you agree to the use of cookies. You can change your cookie settings at any time in your browser settings. Find out more in our privacy policy.