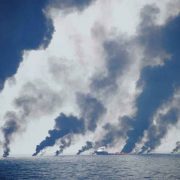 At long last BP is finally standing trial (before a single judge, not a jury) for civil damages caused by their catastrophic blowout in the Gulf of Mexico nearly three years ago. That blowout caused an explosion and fire on the massive Deepwater Horizon drill rig that killed 11 workers, injured many others, and sent the rig to the ocean floor nearly a mile below.  And the resulting oil spill was the nation’s worst to date, spewing some 172 million gallons of crude oil into the Gulf.

Assuming BP and their partners don’t come to a settlement with the Justice Department, the trial is expected to last throughout most of 2013. But don’t hit the snooze button just yet: this could get very interesting.  The trial will be conducted in two phases.  The first phase, underway now, will assign the share of blame for this tragedy among the defendants (BP, Transocean and Halliburton; right now they’re all doing their level best to deflect as much of the blame as possible onto each other).  It will also decide if, as government lawyers are arguing, BP acted with “gross negligence.”  That’s a key ruling because it ramps up the fine BP will pay from the standard $1,100 per barrel spilled, to $4,300 per barrel.  Under the RESTORE Act that Congress passed last year, 80% of that fine will go toward funding restoration projects in the Gulf region. As we wrote back in February 2012,

…federal prosecutors will attempt to paint BP as a “rogue” operator that took unusual risks, to convince the judge that the spill resulted from gross negligence.  BP, to defend itself, will likely claim that their operations, well design, and decisionmaking were not so unusual, and were consistent with industry-wide practices.  To make that case BP will have to present lots of information about the offshore drilling industry as a whole, including the safety record, accidents and near-misses experienced by other companies that we never hear about.  None of the official investigations of the BP / Deepwater Horizon spill looked at the industrywide record, leaving many of us wondering:

Given Shell’s serial blundering during their Arctic drilling program last year — problems so severe they just announced today that they’ve scrapped the entire program for 2013 — we have to wonder if BP is truly a “rogue” or if their level of risk-taking is more or less the norm throughout the offshore oil industry.

By the way, I’m somewhat dismayed at this statement yesterday by the Chairman and President of BP America, Lamar McKay, that suggests BP has a long way to go when it comes to establishing an effective safety culture:

I’m not a risk-management expert but it’s my understanding that this diffusion of responsibility, and unclear definition of authority, is exactly the kind of management muddle that leads to major system failures.  In other words, somebody has to clearly be in charge at all times.

The second phase of the trial will determine how much oil spilled into Gulf waters, the key to determining how big a fine BP will pay and how much money will go toward Gulf restoration.  That will pit lawyers against scientists.  Place your bets.

Thar She Blows! Another Oil “Geyser” in Gulf of Mexico

Landsat-8 Continues 40 Years of Earth Observation
Scroll to top
SkyTruth and/or its third party tools use cookies to monitor traffic in the aggregate on our websites and applications and to improve user experience. If you continue browsing, we'll assume you agree to the use of cookies. You can change your cookie settings at any time in your browser settings. Find out more in our privacy policy.