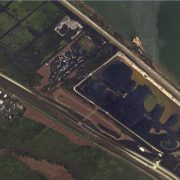 Think you’re safe from the effects of coal exports because you don’t live near a coal mine?

Neither one of those cities is near a coal mine, yet both dealt with the destruction and sadly, the deaths, caused by these train derailments. And what caused those trains to derail, anyway? Debris on the tracks? Human error? Weather? Another side effect of coal exporting is the hazardous coal dust left behind either when the coal is sitting waiting for shipment or when the coal is actually ON the trains being shipped to the coast for exportation overseas.

Still not convinced? Think about this. In a town the size of Los Angeles or Houston, there might not be too much of an effect on traffic if a 137-car coal train came through town. Those cities are big enough to handle traffic. There are hospitals located all over those cities. But what about a city the size of Billings, Montana? You can see from this blog by our Shepherd University intern Yolandita that there would be a serious impact on the region if the town were to be separated — possibly many times each day — by coal trains of this size. A fire or motor vehicle accident on one side of the tracks, fire trucks, EMS or hospital on the other side of the tracks, and a coal train blocking all of the railroad crossings, literally cutting the town in half, would cause a major delay.  And in emergencies, seconds count.

Living on the coast near a coal-export terminal has its own share of risks.  In addition to the chronic dust problem, severe storms can flood adjacent neighborhoods with toxic runoff.  Check out the blog we posted about the damage done to industrial facilities near Braithwaite, LA by Hurricane Isaac in September. Our new partner in the Gulf Monitoring Consortium, Gulf Restoration Network, took to the air to document similar storm damage and problems at a major coal-export terminal. Here’s aerial survey photography we prepared to support that overflight:

So if you think just because you live hundreds of miles from a coal mine, you won’t ever be affected by coal exportation, think again.

Shell’s Grounded Drill Rig Seen From Space – Other Problems Not...