SkyTruth’s vision is for “a world where all people can see and understand the environmental consequences of human activity everywhere on the earth, and are motivated to take action to protect the environment.” 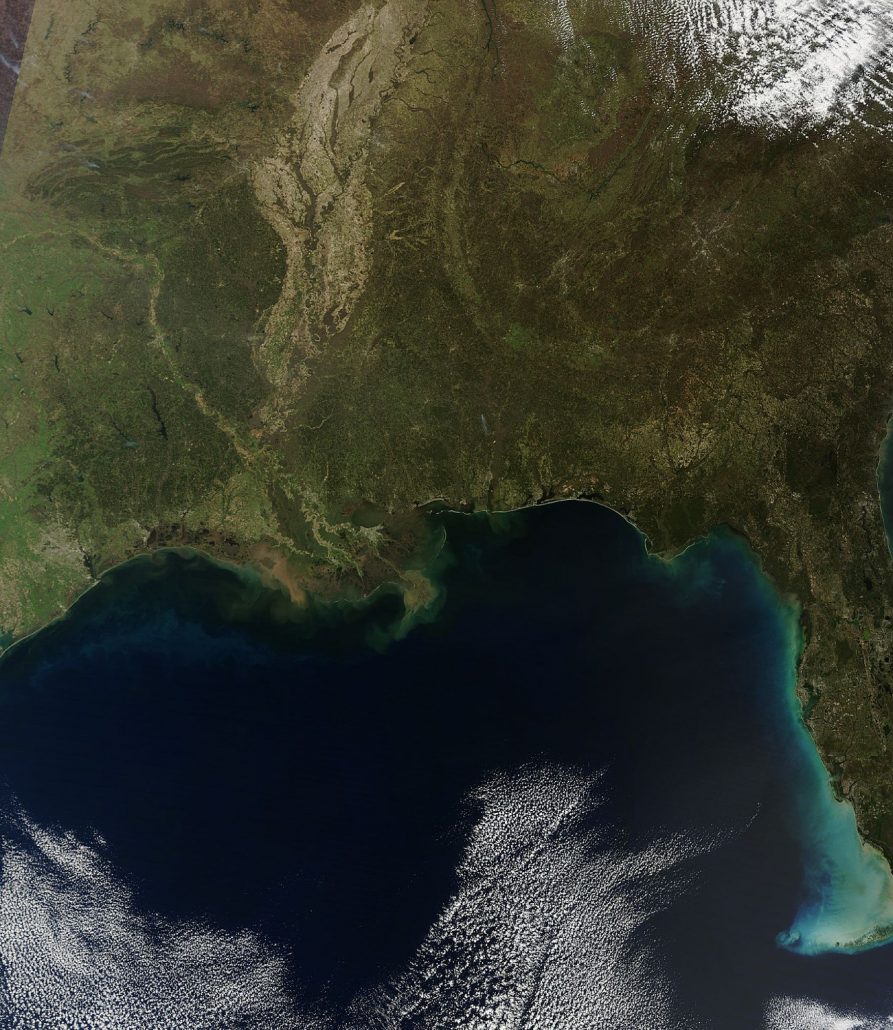 In March we shared a particularly striking view of the Gulf Coast – some images illustrate problems, others are simply beautiful. Click here for the full image from NASA.

In the past year we made significant strides toward realizing this vision, and while we have already shared our Top 10 Most Viewed Articles, we thought it would be good to share what we think were our most significant accomplishments in 2012.

We have continued to document the ongoing spill at Taylor Energy Platform 23051, damaged by Hurricane Ivan in 2004. Still, the oil keeps coming with no sign of activity to finally plug this continuous leak. We set up a website to document the unrelenting chronology of spill reports.

We closely followed Shell’s attempts to drill in the Arctic Ocean during the brief summer season. Ultimately, a series of embarrassing failures (including both of their drill rigs running aground, a flattened spill containment device, criminal investigations on the drillship Noble Discover, and the drill rig Kulluk holed up in a remote harbor south of Kodiak Island awaiting salvage assessment and repair) reinforced concerns that we’re not ready to drill offshore safely in this difficult region. 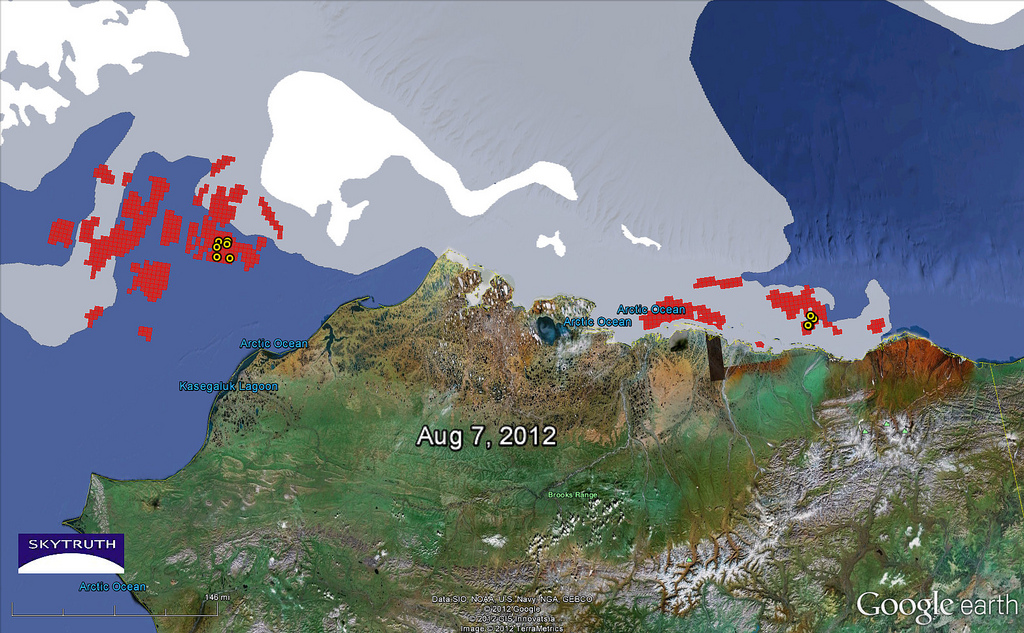 On the left, sea ice retreating in early August, but still rather close to Shell’s Arctic drilling operations this summer in the Chukchi Sea.

Possible Contamination from Stolthaven Chemical Facility, Braithwaite, LA. The Gulf Coast is home to a significant amount of chemical plants, fed in part by petroleum resources pumped out of the Gulf. In the aftermath of Hurricane Isaac, members of the Gulf Monitoring Consortium flew over the Gulf and onshore infrastructure, documenting a number of slicks from storm-damaged facilities, as well as highly visible damage at Stolthaven that forced the evacuation of nearby residents.

“You would think that by now, major industrial facilities planted in the middle of Hurricane Alley would be better able to withstand such predictable storm exposure. But I guess you’d be wrong….”
– John Amos, Sept. 13, 2012

Incident Monitoring: SkyTruth routinely reports on slicks and spills that we observe, including:

Few human activities alter the natural terrain more thoroughly and permanently than  mining, and modern remote sensing allows us to visualize that and measure it very precisely. Using Digital Elevation Models (DEMs) created from aerial survey imagery taken in 2003, and from a Light Detection And Ranging (LiDAR) laser survey flown in 2012, we created detailed representations of the terrain before and after mountaintop removal mining at the Spruce #1 Mine in Logan County, West Virginia. 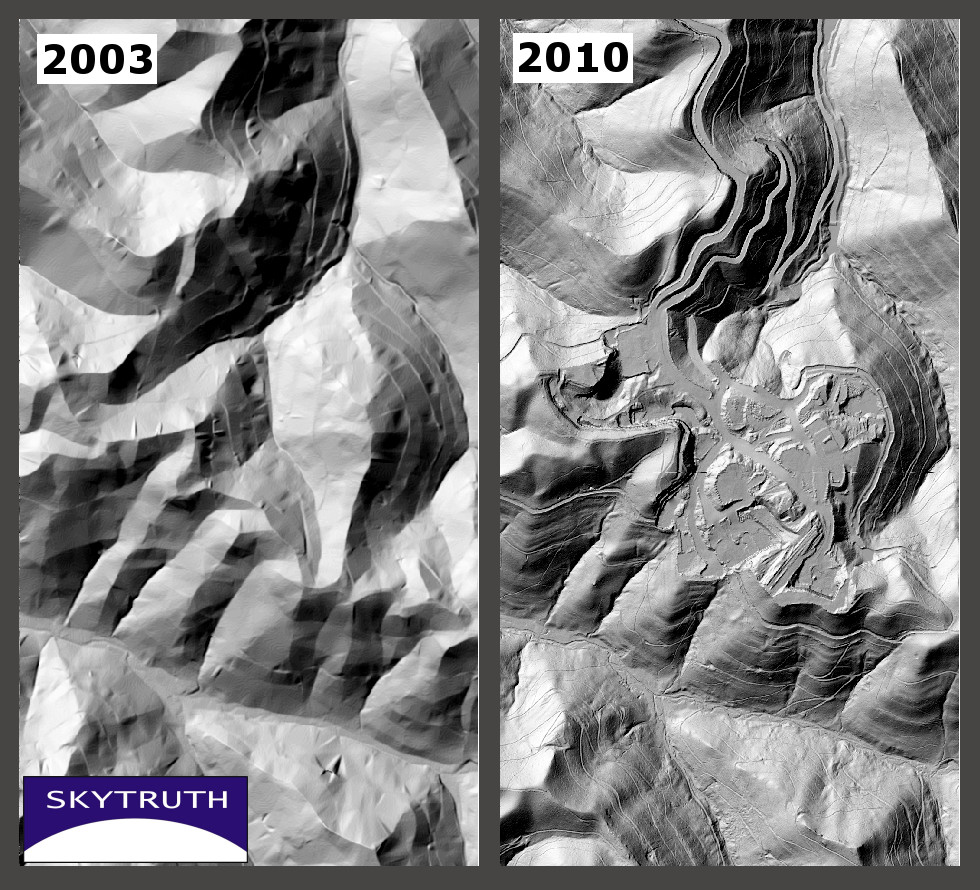 Another area that we turned our attention to is the practice of coal export, predominately to Asian markets due to the growing demand for energy there, and cheaper natural gas prices here. If new coal-export terminals are approved in the Pacific Northwest and on the Gulf coast, coal mining here in the US could accelerate. In this article, we mapped the area that has already been impacted by mining on public lands in the Powder River Basin of Wyoming, compared it to a more familiar area — San Francisco — and showed the area under permit that could be mined in the future.

Oil and Gas Drilling and Fracking

As part of our work on shale gas development in North America, we coordinated two LightHawk flights over active shale gas drilling areas in the Marcellus Shale, documenting the impact shale gas development has on the landscape while showing stakeholders and partners the value of an aerial perspective on these complex issues. Check out the video and our photo galleries.

Waterdogs from The Downstream Project on Vimeo.

Worthy of an entire chapter of SkyTruth history, the FracFocus data release was the culmination of a major effort on our behalf and a significant contribution to the conversation on fracking. With it, researchers and decision makers can finally see the whole picture of reported fracking activity, at least as it is disclosed to the public. There are several critical shortcomings with the current state of “disclosure” (we made specific technical recommendations to the federal government to address some of those flaws), but using the aggregate database we released, anyone can quantify some of those problems and bring them to the attention of the public, regulators, policymakers and industry.

We built this system as an internal tool to help us know when and where to look for spills, but we also realized this system had the potential to be a great resource for the public to stay informed about incidents in almost real-time. In 2012 we significantly improved the Alerts system, adding reports from industry about the chemicals used in hydraulic fracturing operations nationwide, and drilling-related safety and environmental violations issued by regulators in West Virginia and Pennsylvania.

In April we noticed a 92 mile-long oil slick< off the coast of Africa, but on this radar satellite image the likely culprit was revealed as just a bright, white spot headed west at the far end of the slick. Using other data collected by satellites, one of our enterprising Shepherd University interns was able to conclusively identify the mystery ship responsible for this mess. We were told, by folks who should know, that this was the first publicly documented case of detecting a pollution event on the open ocean and identifying the responsible party, using only space-based data.

In another first, we are now using the same approach to detect and assess illegal fishing activity in the South Pacific Ocean. This project is will continue throughout 2013, so stay tuned and check back here for updates on our progress!

Thar She Blows! Another Oil “Geyser” in Gulf of Mexico
Scroll to top