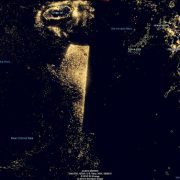 We were wowed like a lot of other folks this week when NASA unveiled the newest “Earth at Night” satellite imagery at the annual AGU fall meeting in San Francisco.  They’ve compiled a bunch of cloud-free, moonless night images collected by the VIIRS sensor onboard the Suomi NPP satellite to create the stunning “Black Marble” vision of Earth at night, the complement to their daytime “Blue Marble” products:

You can explore this neat global dataset in various ways.  Check out an image gallery; play with a handy interactive map; or, my favorite, bring the data into Google Earth, where you can overlay all kinds of other useful data and information to help make sense of what you’re seeing.

So what can you see with nighttime imagery from space?  Well, the lights of cities and towns, of course.  And some other interesting things:  the flaring of natural gas in North Dakota, being treated as a waste product in the Bakken Shale oil-drilling and fracking boom there; flaring offshore too, in the Gulf of Mexico and other locations; fires burning vast areas in Siberia.

And the bright lights of fishing fleets operating around the world. Here’s an example that really caught our eye, in the East China Sea.  The lights from many vessels form a distinct cluster with strikingly sharp, rectilinear edges. I’ve been told this is a real pattern, not a data artifact, possibly revealing “fishing the line” behavior: fishing vessels, armed with GPS navigation systems, are cozying right up to the boundaries of areas where fishing has been restricted or put off limits.These lines don’t seem to match the Exclusive Economic Zone (EEZ) boundaries of Japan, China or Korea. Does anyone know if these patterns we’re seeing really do match up with treaty boundaries or other fisheries agreements?

[UPDATE 12/07/2012 5pm ET]  A few experts weighed in today via email with some very helpful info, and agreed to let me share their comments (lightly edited).

…in short, what you are seeing is ‘aggressive respect for fishing boundaries,’ if I might phrase it that way.

The data we used to make the Black Marble is a composite of several moonless nights in both April and October processed by the NOAA-NGDC in Colorado.  We…mapped that data onto a background colour image and turned plain jane composite light intensity into a colourized map.  So what you are seeing are lights over several different nights in rather different times all added up together at once.

We have noticed… that in many different passes over the Yellow Sea and the general area around the Sea of Japan and the Koreas that there would be boats with lights lined up in what seemed like very unnatural patterns: linear straight lines with sharp corners and such.  If you look here, you can see a less dramatic version of this lining up (in this specific instance, the line they seem to be snuggling along is more of a curved feature).  Those features match up with various fishery boundaries and agreements about respective nation’s areas in shared fishing rights areas (so if you get GIS data for Exclusive Economic Zones, you’ll find that many of these features do not line up with those zones, though some do…)

…because of the current compositing technique done for the Black Marble dataset there are considerably more ship lights than would be seen on any given night…as ships come and go, move around, from night to night you would get “new” points.  From the standpoint of improved sample density, however, it sure helps to outline the political boundaries in more striking detail than any particular night can do!

It’s just another example of how much information content exists in these measurements….and how unique they are from the standpoint of coupling human activity with the natural environment in a way that conventional visible imagery cannot do.

We have seen these EEZ boundary patterns with fishing boats for 20 years from DMSP.  So it is not surprising or new.  Fishery agencies in Japan, Korea, Peru and Thailand use DMSP data from NGDC to monitor fishing boat activity relative to EEZ boundaries.  Note that the new global cloud-free VIIRS nighttime lights product was produced at NOAA…  NASA wrapped NOAA’s product on a “black marble.”

Chevron No Longer Banned from Operating in Brazil

The West Virginia Hills: Flyover of Wetzel County Gas Drilling (Part 2)
Scroll to top
SkyTruth and/or its third party tools use cookies to monitor traffic in the aggregate on our websites and applications and to improve user experience. If you continue browsing, we'll assume you agree to the use of cookies. You can change your cookie settings at any time in your browser settings. Find out more in our privacy policy.