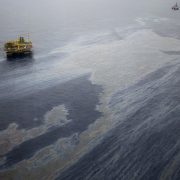 Remember when Chevron spilled 3,600 barrels of oil when they lost control of an exploratory well in the Frade Field off the coast of Brazil last year? Brazilian Federal Appeals Court judge Guilherme Dienthaeler has overturned the ban in what appears to be a rapid move toward a settlement.

“(Reuters) – Chevron Corp received a boost to its efforts to restart oil output in Brazil after a court overturned a ban on its operating in the country and the company agreed on a plan to improve safety procedures after an oil spill last year.” For the full story, click here.
Chevron and Transocean Ltd. (yes, this Transocean) still face up to $20 billion in damages and some criminal charges, but Federal Prosecutor Eduardo Santo de Oliveria who filed the initial lawsuits is disappointed with the move toward settlement. Reuters quoted Oliveria as saying,”I’m afraid we will lose the chance to apply a giant fine and the good that will do for preventing environmental crime.”

Earlier this year, SkyTruth President John Amos travelled to Natal, Brazil to present our observations at the Brazilian Congress on Protected Areas. For more, click here if your Portuguese is up to par, if not maybe just try Google Translate.