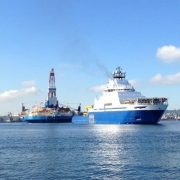 The USCG said Friday that it is coordinating a response with Royal Dutch Shell representatives after the company’s brand new $200 million tugboat experienced multiple engine failures while towing Shell’s arctic semisubmersible drilling rig, the Kulluk, approximately 50 miles south of Kodiak Island Friday, in 20-foot seas. Rough but not unusual conditions for the Arctic.

This is right on the heels of the Coast Guard discovering “several major safety and pollution prevention equipment” deficiencies on Shell’s other Arctic rig, the Noble Discoverer drillship.

And remember when the Discoverer went rogue and ran aground in Dutch Harbor back in July?

And Shell crushed their supposed oil spill containment device “like a beer can” during a field test this summer in water just 120 feet deep?

After having multiple delays getting their oil spill response vessel to meet Coast Guard standards?

This is a surprising – alarming? – series of missteps, mistakes and outright failures for a company of Shell’s size, talent, market cap and ambitions.  Especially considering how much time and money, and political capital, they’ve invested in this program.  But it’s not too late to take a prudent time out to allow a thorough, critical evaluation of whether we are really ready to drill safely in the Arctic, and respond effectively to oil spills in that tough environment.

Because if Shell isn’t ready after all this time and effort and investment, then who on earth is?

We here at SkyTruth are happy to see the our data being put to good use by our colleagues over at FracTracker. Using our fracking chemical database that we released last month, they have created an interactive map that visualizes where diesel fuel is being used in hydraulic fracturing. In October we posted that industry self-reported using diesel fuels at least 448 times, in spite of the fact these substances are the one family of chemicals not included in the abundantly generous “Halliburton Loophole.”

Check out FracTracker’s interactive map embedded below to see where this practice is used most. (Kerosene in Arkansas, New Mexico, Colorado, and N. Pennsylvania, and diesel fuel [sometimes called petroleum distillate] in Texas esp.)
To find out more about the practice, why it is dangerous, and how diesel fuels are defined, check out our original post on this issue:
The Exception to the Exception: Still Fracking With Diesel
/wp-content/uploads/2016/08/test_logo.png 0 0 David Manthos /wp-content/uploads/2016/08/test_logo.png David Manthos2012-12-26 21:41:002017-09-26 12:30:16Fracking With Diesel Fuel 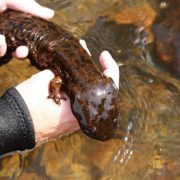 This past summer SkyTruth and the Downstream Project went up to Northern Pennsylvania to document Marcellus Shale gas development in and around the Pine Creek Watershed, a watershed known to Pennsylvanians as the “Grand Canyon of the East.” Our trip was facilitated by LightHawk, a volunteer conservation pilot association who took us up in a single-engine aircraft to get an aerial perspective on unconventional shale gas wells popping up across the Northern Tier (Read more about our part of the story here). However, one of the most unique features we found was the waterdogs.

“Waterdog” is a nickname for a type of Hellbender, North America’s largest salamander. But because of local citizens’ concern for the habitat and health of these elusive creatures, and the amount of time volunteers spend in the streams they care about, these citizen-scientists have taken to calling themselves the “Pine Creek Waterdogs.” To learn more, check out: 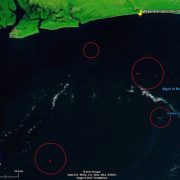 Looks like flaring on offshore oil and gas platforms in Africa didn’t take a holiday this year. As you can see by this MODIS Aqua 7-2-1 image from  12/23/2012, there was lots and lots of flaring activity going on off the coast of Nigeria.

And not to be outdone, this area where we’ve seen flaring before is at it again:

You can read about that spot off the Niger Delta on our blog post of December 3.We still don’t know who is operating out there, so if anyone knows, fill us in! 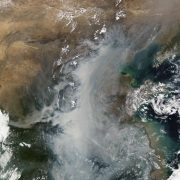 SkyTruth has joined WaterKeeper Alliance members from around the Pacific Rim and other NGO’s in petitioning the Army Corps of Engineers (ACoE) to  widen the scope of their environmental impact statement (EIS) for the Gateway Pacific Coal Terminal at Cherry Point in Whatcom County, WA. We endorse this petition because it supports our vision of “a world where all people can see and understand the environmental consequences of human activity everywhere on the earth.”
From our perspective of the earth through the lenses of satellites, aerial images, and spatial data, we have a unique perspective on the footprint of human activity and the far-reaching impacts of our development. In order for the ACoE to make a accurate judgement on the positive and negative elements of this project, all of the impacts have to be accounted for. This petition calls for a thorough environmental impact statement that:
The comment period will remain open through January 21, 2013: to sign, visit:
http://ecowatch.org/2012/coal-export-petition/
https://skytruth.org/wp-content/uploads/2012/12/rsz_1china_amo_2010281_lrg.jpg 641 1024 David Manthos /wp-content/uploads/2016/08/test_logo.png David Manthos2012-12-14 00:40:002019-02-19 10:23:03SkyTruth Joins Petition Regarding Pacific NW Coal Exports