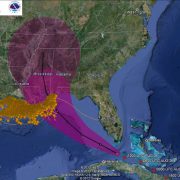 The latest forecast for Tropical Storm Isaac shows it likely headed into the Gulf of Mexico along a track slightly further west than earlier forecasts.  That would have it passing through an area of dense offshore oil and gas infrastructure.  While it’s currently still a tropical storm, it’s predicted to strengthen over warm Gulf waters, possibly reaching Category 2 strength.  That’s significantly weaker than Hurricanes Katrina and Rita, which caused so much damage back in 2005, resulting in 9+ million gallons of oil spilled from coastal and offshore facilities. Hurricanes Gustav and Ike in 2008 also caused problems, blowing drill rigs around the Gulf and flooding coastal oil storage tanks and wells.  So we’ll be keeping a close eye on Isaac in coming days.

These maps show the latest forecast from NOAA / National Weather Service.  The dark line is where forecasters predict the center of the storm is most likely to pass (the “storm track”); the purple area is the cone of uncertainty for that track. Orange dots and lines are offshore oil and gas platforms and pipelines.

Isaac Forecast Track: Shifting West
Scroll to top
SkyTruth and/or its third party tools use cookies to monitor traffic in the aggregate on our websites and applications and to improve user experience. If you continue browsing, we'll assume you agree to the use of cookies. You can change your cookie settings at any time in your browser settings. Find out more in our privacy policy.