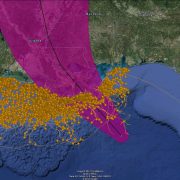 Isaac is still a strong tropical storm with winds at 70 mph, now hitting the offshore oil fields in the Gulf of Mexico. Isaac is by no means a pushover, posing a serious threat of flooding to New Orleans and surrounding areas inland, but it is far weaker than Hurricanes Katrina and Rita which slammed the oil fields as Category 5 storms in 2005, destroying dozens of platforms, breaking hundreds of seafloor pipelines, and spilling millions of gallons of crude oil.

Here’s the latest forecast track for the storm.  Oil and gas infrastructure shown in orange.  The predicted path for Isaac’s center is shown as a black line, with the “cone of uncertainty” for the path shown in purple.  This does not show the extent of tropical-storm-force winds thatt extend outward for a considerable distance from the storm’s center:

Hurricane Isaac Heading for Shore – MODIS Image
Scroll to top
SkyTruth and/or its third party tools use cookies to monitor traffic in the aggregate on our websites and applications and to improve user experience. If you continue browsing, we'll assume you agree to the use of cookies. You can change your cookie settings at any time in your browser settings. Find out more in our privacy policy.