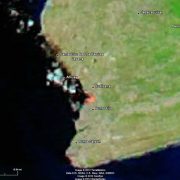 On Saturday, August 25, an explosion and fire at one of the world’s largest oil refineries, the Amuay on the coast of Venezuela killed 41 people and injured more than 150, according to the Washington Post.  While the actual cause has not yet been officially determined, officials have said that a gas leak led to the blast. The fire was finally extinguished after three days, according to the Christian Science Monitor.  Our hearts go out to the families and friends of all who were killed or injured in the blast.

Here’s how it looked from space on August 26: