Remember back in April we blogged about flaring operations in Iraq? I had checked back as far as 2009 and saw that this flaring was happening continually. Well it’s still happening. Check out this MODIS image taken over Iraq yesterday: 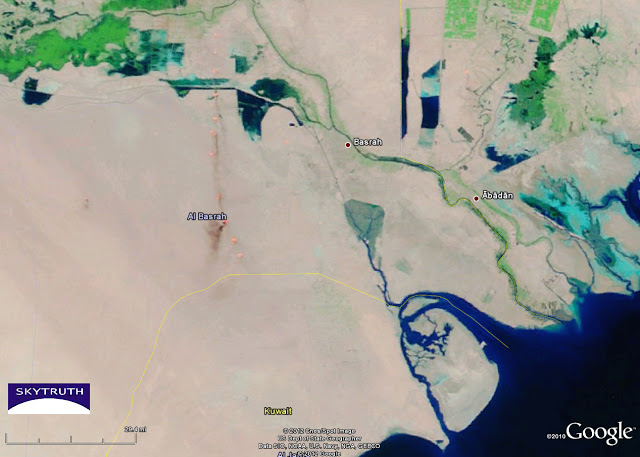 This flaring has been going on for at the very least 3 and a half years, folks. And that’s just as far back as I went looking at imagery. It’s probably been much longer than that.

As a non-expert in all things technical, I asked myself the question: What is flaring? What’s the purpose? And according to Wikipedia, flaring is done at petroleum refineries to release raw natural gas created during the process of refining oil. The article also goes on to say that to keep the system functional, a small amount of gas is always burning, like a pilot light, so that the system is always ready as a safety system when over pressurizing occurs. A pilot light is one thing, but to be able to see these giant flares on satellite shows that everyday there is flammable gas being released and burned off by these flares. What is that doing to the health of those living downwind of these flares?

This is not just a problem in Iraq. We’re increasingly flaring off natural gas here in the US, mostly because of the booming Bakken oil play in North Dakota – Montana. Those oil wells also produce gas, but there aren’t any gas pipelines to take it to market.  So it’s just being burned off. What a waste of this resource.