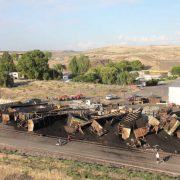 In the past 2 weeks, there were 4 different coal train derailments in the United States. On Wednesday, June 27 a Union Pacific coal train derailed near Junction City, in northeastern Kansas, overturning or crushing 23 rail cars.  The train was en route to Memphis from a mine in Colorado, according to this report.

On Wednesday, July 4 in the Chicago suburb of Northbrook, another train derailed, sending 28 coal cars off the tracks, causing an 86-foot long railway bridge to collapse onto a passenger vehicle, killing 2 people. According to this report from the Chicago Tribune, this train was en route to a utility plant in Wisconsin from a coal mine in eastern Wyoming.

Later that evening, yet another coal train derailment occurred in Pendelton, Texas — this time sending 43 BNSF cars flying off the tracks and causing hundreds of tons of coal to be strewn everywhere. This quote from the Temple Daily Telegram is pretty powerful:  “What people see in the sky that looks like smoke is actually coal dust” – Trooper Shawn Andersen, TX Department of Public Safety. Think coal dust isn’t a big problem? Think again.

What the heck is going on? What’s causing these derailments? Is it the record high temperatures?

Below is a list of the temperatures for each location on the day when each derailment occurred thanks to weather.com.

In this July, 2010 article from PBS Newshour, multiple days of high temps can cause ‘heat kinks’, spots where the tracks get so hot they expand into wave-like shapes. According to this blog from St. Louis’ KMOV, areas on tracks that expand from the heat are referred to as ‘sun kinks’. Call them what you want to call them. These kinks, when left unchecked, can result in derailments. That’s what possibly happened just this past weekend in Washington, DC to the Metro Green Line from Greenbelt, Maryland into the District. This passenger train derailment happened at 4:45 on Friday July 6, prime rush hour. Luckily, there were no injuries, because when there is extreme heat, the Metro DC trains operate under heat restrictions that limit their speed. These restrictions cause delays and inconveniences for some passengers, but slower train travel means less chance of accident. Were there any heat advisories in place in those towns that might have prevented those coal trains from derailing?

SkyTruth intern Yolandita blogged about visualizing local impacts of coal exports to Asia, using all sorts of Google tools, and the finished product [video] was quite an eye-opener for many readers. The daily average would have 930,000 tons of coal being transported every day from Wyoming to Washington. That’s 60 coal trains per day.  And in just the past two weeks we’ve had 4 coal train derailments. Tita’s work shows what a 137-car coal train will look like passing through small towns. Most of the time these massive trains get from point A to point B with little or no trouble. But as we’ve seen this month, sometimes they don’t: