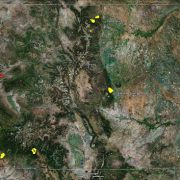 Wildfire season is off to a roaring start.  Large fires are burning in several Rocky Mountain states.  Check the US Forest Service’s National Fire Detection Maps to see the latest nationwide.  These fires are detected by the MODIS sensor carried on the Terra and Aqua satellites, as well as other sensors. Here’s what’s happening in Colorado right now:

Of course, there are also tens of thousands of oil and natural gas wells in Colorado.  The red spot in western Colorado on the map above caught our eye.  That’s the new Pine Ridge fire, and it happens to fall within the Piceance Basin, one of the nation’s most active natural-gas plays. Gas drilling with hydraulic fracturing (fracking) took off here in the 1980s and has been booming ever since.

Zooming in on the Pine Ridge fire (below), we’ve plotted active oil and gas wells as blue dots.  This is old data we collected way back in April 2008, so there are probably additional wells in the area now that we’re not showing.  Look closely at the imagery in Google Earth or Google Maps and I’ll bet you can see a few.  The red and orange squares indicate active fire detections from MODIS since 7:45am MDT yesterday. That means fire was burning somewhere within each square, but not necessarily covering the whole colored area.

We don’t know what happens if a wildfire burns in close proximity to natural gas wells and pipelines (got any stories you can share with our readers?). Vegetation should be regularly cleared away from those facilities so they’re not endangered. The web of access roads might even make it easier for fire crews to get to the scene.  But the presence of wellheads, pipelines, compressor stations and processing facilities that demonstrably leak explosive and flammable natural gas might add some risk to the fire-fighting effort.

As drilling spreads across Western lands, the intersection of wildfire and gas infrastructure will become increasingly common. Let’s tighten up that leaky infrastructure to save energy and money, cut pollution, and — quite possibly — save lives and property.

Fracking and Public Disclosure – 43% Doesn’t Cut It
Scroll to top
SkyTruth and/or its third party tools use cookies to monitor traffic in the aggregate on our websites and applications and to improve user experience. If you continue browsing, we'll assume you agree to the use of cookies. You can change your cookie settings at any time in your browser settings. Find out more in our privacy policy.