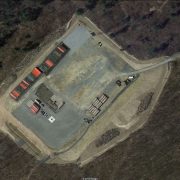 Google Earth just injected a fresh batch of imagery.  They update Earth regularly, and I always check in on the Google Lat/Long Blog to see if anything new has appeared in the places we’re monitoring here at SkyTruth.  They give you this handy KML file you can download that shows the areas around the world that have updated images. You can also sign up using Google’s Follow Your World tool to get an email notification whenever any new images appear for your custom-selected area of interest.

One of the places with new imagery lies in the heart of the Marcellus Shale gas-drilling and fracking play, covering parts of several counties in northwestern Pennsylvania.  Here’s an example looking at an area about 4-1/2 miles east-southeast of Kane, where I did some hiking as a 14-year-old back in the 1970s (and had my first encounter with a black bear – quite a thrill).  It was unbroken, wild forest back then.

The newest imagery, shot in April 2012 before spring leaf-out, shows striking details of a new well pad covering 13.1 acres.  SkyTruth Alerts tells me this is a Seneca Resources horizontal well that was granted a drilling permit from the state in December 2011. It looks to us like the well has already been drilled and fracked. Piles of logs along the edges of the pad attest to the small trees that were cut down. 47 rectangular fracking tanks are lined up, and a stack of light-brown mats are waiting to be taken away to the next job. A couple of backhoes are working; one seems to be pulling up the liner from what was probably the fluid reserve pit:

The access road to this site has been around for a while – most of the area covered by the pad above had been logged sometime after 2005, based on flipping through the Google Earth historical imagery for this site. Here’s what it looked like in summer 2010, the imagery that was in Google Earth before this latest update:

So check out Google Earth again if you haven’t for a while, and re-visit your favorite places to see if anything’s new.  And if you see anything you can’t figure out, or that concerns you, let us know.

Fracking and Public Disclosure – 43% Doesn’t Cut It Same old song and dance
Scroll to top
SkyTruth and/or its third party tools use cookies to monitor traffic in the aggregate on our websites and applications and to improve user experience. If you continue browsing, we'll assume you agree to the use of cookies. You can change your cookie settings at any time in your browser settings. Find out more in our privacy policy.