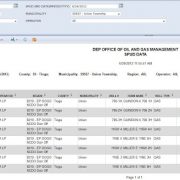 We’re looking for more information on that methane leak problem in Union Township, Tioga County, PA that was reported last week.  Despite a seriously alarming 30-foot geyser of water and methane, the contamination of a drinking water well, and the suspension of activity at Shell gas wells, we’ve seen no followup news coverage. We’re still working on the assumption that a fracking operation, at a new Marcellus Shale natural gas well being completed by Shell, intersected an old abandoned oil well that apparently wasn’t in the state DEP’s database.  By the way, that database contains information on 8,000 or so “known” abandoned oil and gas wells in Pennsylvania (we mapped ’em).  Possibly as many as 100,000 other abandoned wells are lurking out there, somewhere. After all, commercial oil production first began here back in the mid-1800s, long before there were state agencies and regulations and databases that we take for granted now.

We did a search on the PA DEP’s spud reports website to learn more about the three new wells that Shell reportedly shut down when the leak was discovered.  They are the Guindon wells shown in the table below. Drilling apparently began on all three in late January of this year (you can only drill one well at a time on a single well pad, so I’m not sure these so-called spud reports are telling us when the drilling actually got underway):

We plugged the Guindon wells into Google Earth to see where they’re located.  Here’s the area as it appeared in 2008, before any drilling-related activity began.  Looks like a typical bucolic northern Pennsylvania scene: small roads, dirt lanes, fields and a house:

Here’s the same area in late 2010, after a 7-acre well pad has been built, dwarfing the nearby homesite. The beige spots in the newly mown fields on the left are probably hay barrels.  The locations of the Guindon wells that were drilled this year are marked: