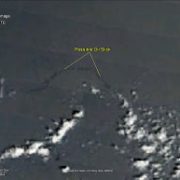 Yesterday evening Shell reported sighting a 10-mile by 1-mile oil slick between two of their major deepwater oil production platforms, Ursa and Mars. (Here’s what Mars looked like after getting walloped by Hurricane Katrina back in 2005.) Actually, federal employees with BSEE who happened to be out there noticed the slick and helpfully pointed it out to Shell, who then mobilized a nearby cleanup vessel and some ROVs to do seafloor inspections.So far Shell claims the slick is not caused by any of their operations, and they note the presence of known natural oil seeps nearby.

This is located in the Mississippi Canyon area of the Gulf, 130 miles south of New Orleans and about 60 miles beyond the tip of the Mississippi Delta, in water about 3,200′ deep.

Yesterday’s low resolution MODIS/Terra satellite image of the area, shot at 16:50 UTC (10:50 am local time) shows what appears to be a narrow, 17-mile-long slick in the vicinity of the two platforms.  We often see slicks from known natural oil seeps that are about this size; some in the Green Canyon area to the west show up well on this same image.  Low clouds and their shadows are scattered across the lower half of this view: 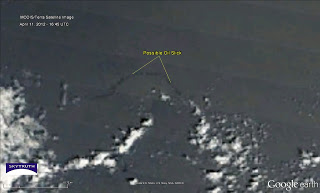 Here is the same scene; we’ve traced the slick in yellow: 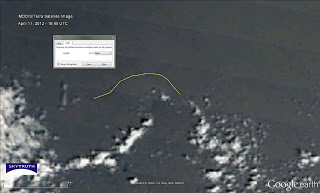 And here is the same scene again. We’ve added the locations of known oil and gas platforms (orange dots) and seafloor pipelines (orange lines).  Green dots indicate the locations of known natural oil seeps, based on data provided by Florida State University. Sea-surface wind data collected from the Mars platform show that the wind was blowing from the west or northwest for most of the day on April 11, so we think this slick should originate from a source near the west (left) end.  We don’t see any obvious candidates near that end of the slick, so at this time we’re not sure what to make of this: 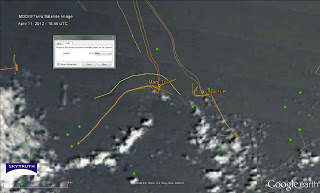 Our friend in the air, Bonny Schumaker, flew out over this site today and reported seeing a thin patchy slick of rainbow sheen but no obvious source.  She’ll post photos and video to her site soon.  In the meantime, check out the report, videos and photos from her Gulf overflight on April 6, documenting continuing chronic leakage from the Taylor Energy / 23051 site and a few other surprises – some good, some not so much.

Bad News for Pollution Monitoring – US Needs a Radar Satellite, Stat!
Scroll to top
SkyTruth and/or its third party tools use cookies to monitor traffic in the aggregate on our websites and applications and to improve user experience. If you continue browsing, we'll assume you agree to the use of cookies. You can change your cookie settings at any time in your browser settings. Find out more in our privacy policy.