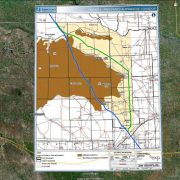 TransCanada just published their “preferred alternative” routing of the proposed Keystone XL pipeline through Nebraska.  They went back to the drawing board after a barrage of complaints that the pipeline would cut through the visually striking and ecologically distinctive Sand Hills region, and run across the economically vital Ogallala Aquifer.  We’ve created a series of maps showing this new route, superimposed in Google Earth.

National Wildlife Federation and others aren’t exactly thrilled with this proposed alternative route either, claiming it still intersects those sensitive areas.  And if you’d like to see the “business end” of this controversial pipeline, check out our maps and images of the vast tar sands mining and extraction operation up in Alberta.  Take a quick video tour to see just how big this already is.

Flaring Operation in Iraq Since at Least 2009
Scroll to top