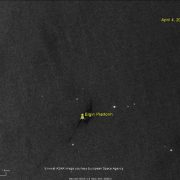 The out-of-control well owned by French company Total in the central North Sea’s Elgin field is still spewing natural gas into the air.  The good news is a crew was able to visit the rig yesterday, raising hopes that a top-kill can be conducted by pumping mud into the well from the rig itself, which would stop this blowout a lot faster than Plan B – drilling a relief well to perform a bottom-kill.  Also encouraging: the rate of gas flow seems to be decreasing.

We noted a small slick at this site on a radar satellite image taken March 27.  Another image, taken on April 4, also shows a somewhat smaller slick (see image below).  This is probably caused by natural-gas condensate, a volatile and toxic hydrocarbon liquid that evaporates relatively quickly.  We don’t see any reason to expect this incident to morph into a significant oil spill.

But this is yet another close call for the global oil industry since the disastrous Gulf blowout in 2010.  If this well had been tapping a high-pressure oil reservoir, like most of the new deepwater wells being drilled around the world, the outcome could have been a BP / Deepwater Horizon repeat. Ugh.  We’re not ready to see that mess again any time soon.

Extreme Bilge Dumping, Angola
Scroll to top
SkyTruth and/or its third party tools use cookies to monitor traffic in the aggregate on our websites and applications and to improve user experience. If you continue browsing, we'll assume you agree to the use of cookies. You can change your cookie settings at any time in your browser settings. Find out more in our privacy policy.