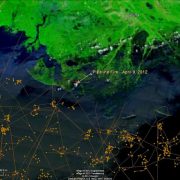 Our SkyTruth Alerts system gave us a heads up that there was an explosion and fire around noon yesterday in the marshes of Terrebonne Parish, Louisiana.  One caller to the National Response Center noted flames shooting 150′ into the air; another caller, perhaps a bit more excited, claimed 800′.

At about the same time, a caller from Texas Gas Transmission Co. detected a huge drop in pressure in one of their gas pipelines, while noting a fireball in the marsh in the vicinity of the pipeline.  So far we’ve seen no mainstream news coverage of what must have been – and maybe still is – a spectacular pipeline failure.  This area can only be accessed by boat, perhaps explaining the lack of coverage.

The fire was burning so hot that it shows up as a fuzzy red spot in this low-resolution MODIS/Terra band 7-2-1 satellite image, taken yesterday at 1pm local time, about an hour after the fire was reported to the NRC:

Hopefully the line was shut off and quickly burned out but we’ll let you know if we see this fire on today’s satellite images as well.

Second Chronic Leak Found Off Coast of Nigeria – Natural Seep?
Scroll to top
SkyTruth and/or its third party tools use cookies to monitor traffic in the aggregate on our websites and applications and to improve user experience. If you continue browsing, we'll assume you agree to the use of cookies. You can change your cookie settings at any time in your browser settings. Find out more in our privacy policy.