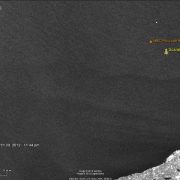 The big semisubmersible drill rig, built in China and now drilling a deepwater oil well for the Spanish company Repsol in the Florida Straits off Cuba (hey, it is a global industry), has finally made an appearance on a radar satellite image.

This Envisat ASAR image, shot at 11:43 pm local time on March 30, shows a trio of very bright spots about 17 miles north-northwest of Havana.  We think the largest of these spots, with an interesting cross-shaped “ringing” pattern often seen on radar images of big, boxy metal objects, is the Scarabeo-9 rig.  The other two spots may be crew vessels or workboats:

The location marked in orange is a report we just got through the SkyTruth Alerts that a small possible oil slick was sighted nearby during a US Coast Guard overflight yesterday morning. We don’t think this is anything alarming; it’s probably just some of the typical oily crud you’ll get from an active drilling operation at sea, that we observe on a regular basis in the Gulf of Mexico with our Gulf Monitoring Consortium partners.

Here’s a zoomed-out look, showing the coastline of Cuba and the city of Havana:

And here’s the big picture, showing Cuba, Key West and the rig location: 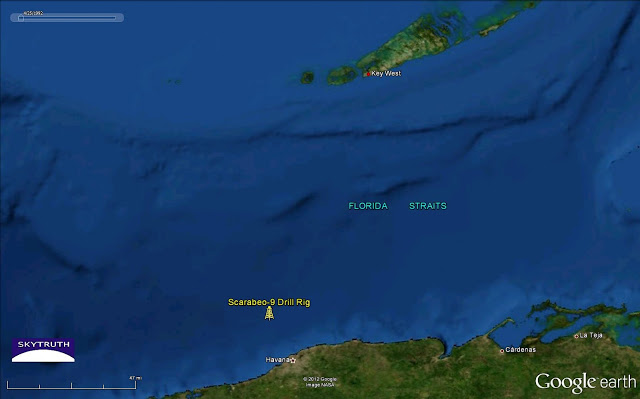 We’ll keep watching this area.  Many people are concerned about the potential of a major spill from this site affecting the east coast of Florida and the southeastern US, and the lack of oil spill response coordination and cooperation between Cuba and the United Sates.

Gas Well Blowout in the North Sea – Small Slick on April 4
Scroll to top
SkyTruth and/or its third party tools use cookies to monitor traffic in the aggregate on our websites and applications and to improve user experience. If you continue browsing, we'll assume you agree to the use of cookies. You can change your cookie settings at any time in your browser settings. Find out more in our privacy policy.