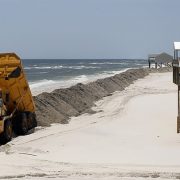 There’s been plenty of ink the past couple of weeks about the lingering impacts of the BP / Deepwater Horizon oil spill in the Gulf of Mexico.  Two years ago here at SkyTruth we were just beginning to raise the alarm that the spill was actually much larger than we were being told by BP and government officials, and that the nation’s previous worst oil spill — the Exxon Valdez disaster — had already been surpassed.  Months of agony and economic loss followed for folks in the Gulf region and beyond. Recovery has come in fits and starts, with mixed news for offshore drilling and tourism (generally up), and for fishing and the environment (generally down).

We recently learned about another long-term casualty of the oil spill: Dauphin Island, Alabama, a beautiful stretch of barrier island at the mouth of Mobile Bay. In this case most of the damage was done not by the oil spill itself, but by a panicky and ill-conceived response effort during the spill (“we had to destroy this village, in order to save it“).  Large quantities of sand were excavated from a series of pits on the Mississippi Sound side of the island to build a berm along the Gulf side, a move designed to keep oil from washing up over the beach in case of a storm:

The berm was never needed. Possibly it would have helped if a hurricane came along during the spill, but it’s not clear such a flimsy barrier would survive long under those conditions.  What has become apparent is how rapidly and dramatically this action is altering Dauphin Island.  22 pits were dug into the Sound side of the island to excavate the necessary sand. These pits quickly became ponds of standing water. The ponds are steadily eroding and growing to the point where some are now open to the sea, and subject to further erosion by waves and tide. Satellite imagery and aerial survey clearly show how this has progressed, threatening properties on this developed part of the island:

This area full of houses now looks strikingly similar to how an undeveloped stretch of the island a few miles to the west appeared before it was breached by Hurricane Katrina in 2005.  Called the Katrina Cut, the mile-long breach had grown to nearly 1.4 miles wide by June 2010, when the Army Corps of Engineers began piling up a barrier of rock and sand to close off the gap and block BP’s spilled oil from entering the Sound.  This barrier ended up costing $17 million, and didn’t fully close the Cut until January 2011 — four months after BP’s runaway Macondo well had been plugged, and just five months before the whole danged thing was supposed to be removed, according to the original construction permit.  The State of Alabama is asking for permission to keep the structure in place, although one scientist thinks that’s not a good idea.

What’s more, the sand berm was apparently piled on top of water and sewer lines servicing the island, causing potential problems and additional expense for future maintenance work.  In this case, it looks like the actions taken to minimize damage from the oil spill might actually cause worse impacts down the road.  Will we be making the same dubious decisions when the next major oil spill comes around?

View a slideshow of our time-series images of Dauphin Island, or check them out one at a time in our Flickr image gallery.

Tanker Collides With Drill Rig Off Corpus Christi, Texas
Scroll to top
SkyTruth and/or its third party tools use cookies to monitor traffic in the aggregate on our websites and applications and to improve user experience. If you continue browsing, we'll assume you agree to the use of cookies. You can change your cookie settings at any time in your browser settings. Find out more in our privacy policy.