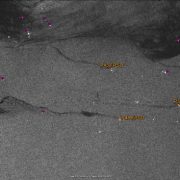 Brazil is coming down hard on Chevron for the relatively modest oil spill that occurred last November when they lost control of a deepwater exploration well in the Frade field of the Campos Basin, about 75 miles offshore.  A federal prosecutor just filed a lawsuit and criminal charges against Chevron and their drilling contractor Transocean.  Seventeen executives of those companies have also been charged.

Brazil’s President has made it clear that the country will treat all oil companies, domestic and international, the same when it comes to safety.  Petrobras, the Brazilian national oil company, is the main operator in Brazilian waters, and they’ve had their own share of problems lately.  We’ve observed small slicks from Petrobras facilities since we started our daily monitoring of this area a few months ago.  And this Envisat ASAR radar satellite image of the Campos Basin, taken at 9:18 pm local time on March 20, shows what appear to be long, narrow slicks emanating from several Petrobras production platforms and FPSOs:

This is a complex image.  Platforms, FPSOs, drill rigs and vessels appear as bright spots on radar. The large, indistinct dark areas in the upper part of the image are also slicks, but not caused by oil (a “slick” is any patch of smooth water, appearing dark on a radar image). Instead, these patches are probably caused by areas of very low wind speed, and/or by heavy rainfall.  Sea-surface wind data, taken almost the same time as the radar image above, indicate there was unsettled stormy weather in the area:
More images and maps after the jump….

Chevron’s Frade field is covered by the same March 20 radar image.  No slicks are apparent in the vicinity of the spill that occurred last November, where Transocean’s SEDCO 706 semisubmersible rig was drilling a deepwater exploration well for Chevron:

However, sea-surface wind speed data indicate that strong winds moved through the Frade field (located at about 22 degrees South latitude / 39 degrees West longitude) in the day before the radar image was acquired.  These winds, and the rain that probably accompanied them, were strong enough to disperse the thin oil slick that was reported recently at Frade:

Investigation of Chronic Mystery Slick off Nigeria’s Coast
Scroll to top
SkyTruth and/or its third party tools use cookies to monitor traffic in the aggregate on our websites and applications and to improve user experience. If you continue browsing, we'll assume you agree to the use of cookies. You can change your cookie settings at any time in your browser settings. Find out more in our privacy policy.