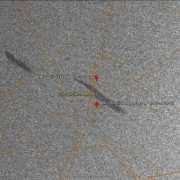 Every now and then we see something in SkyTruth Alerts that catches our eye. For the past few days we’ve noticed repeated reports of an unknown oil slick sighted near some platforms near Block 321 in the East Cameron (South Addition) area of the central Gulf of Mexico, about 92 miles off the Louisiana coast. We also see two slicks in the vicinity on an Envisat ASAR satellite radar image taken about noon local time on March 14.  The slicks aren’t particularly big, on the image or in the reports, but their persistence in the area under strong winds blowing steadily from the southeast suggests that there is a continuous source of oil leaking at this site.  This is close to a major international shipping lane for the port of Houston, and there are also quite a few platforms and pipelines in the neighborhood:

The water depth here is about 200-300 feet (note that a pipeline in this area was damaged during drilling operations back in 1978). Oil slick sightings were reported to the National Response Center, probably by personnel on the nearby platforms, on March 14, 15 and 16.  No source or cause is indicated in the reports.  We don’t know if there is any active drilling occurring in the area.

Slicks in Campos Basin, Offshore Brazil – March 20, 2012
Scroll to top
SkyTruth and/or its third party tools use cookies to monitor traffic in the aggregate on our websites and applications and to improve user experience. If you continue browsing, we'll assume you agree to the use of cookies. You can change your cookie settings at any time in your browser settings. Find out more in our privacy policy.