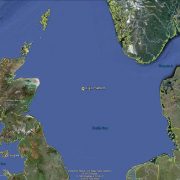 On March 26, Total reported a gas leak that forced them to evacuate more than 200 workers from a production platform in the Elgin field of the central North Sea, about 150 miles east of Aberdeen, Scotland.  It soon became clear they had an uncontrolled blowout of natural gas and liquid gas condensate, a potentially explosive situation that has caused other companies to evacuate and shut down operations at neighboring facilities miles away from Totals’ Elgin platform.  The Oil Drum has compiled excellent information about this serious ongoing incident.  Hopefully the failed well will collapse on itself (“bridge over”) and shut off the high-temperature, high-pressure flow of gas from this deep reservoir.  Otherwise, it may continue to flow and pose an extreme fire and explosion hazard until a relief well can be drilled, which could take a couple of months.

This leak is mostly natural gas escaping into the atmosphere at sea level — something we can’t see on satellite imagery — but a small slick of liquid gas condensate has also been reported at the site.  This Envisat ASAR radar satellite image, taken yesterday at about 9:23 pm local time, shows a patchy slick covering about 89 square kilometers (34 square miles).  The platform itself appears as a very bright spot on the radar image but it’s covered up by our yellow rig icon marking the location:

Cuba Offshore Drilling Rig Spotted on Radar – Small Slick Reported
Scroll to top
SkyTruth and/or its third party tools use cookies to monitor traffic in the aggregate on our websites and applications and to improve user experience. If you continue browsing, we'll assume you agree to the use of cookies. You can change your cookie settings at any time in your browser settings. Find out more in our privacy policy.