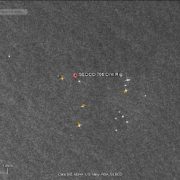 Chevron and Brazilian regulators reported that a small, fresh oil slick has appeared near the site of Chevron’s blowout last November in the deepwater Frade oil field in Brazil’s prolific Campos Basin. This is not entirely unexpected given the nature of the problem that Chevron had with the well being drilled by the SEDCO 706 rig: an unknown amount of oil escaped laterally from the well into surrounding bedrock, and worked its way up to the seafloor along a pre-existing natural fault.  It will take some time for all of that oil to emerge, so we’ve been anticipating chronic small oil slicks at this location.

But optical satellite imagery of this area (MODIS and MERIS) have had problems with clouds and haze for the past few days, so we haven’t seen any sign of the latest slick. Radar images don’t have that problem, but the most recent radar image we have was taken at about 9pm local time on March 9, and it looks clean around the SEDCO 706 site:

We do see a small slick on this image, though, about 80 km south-southwest of the Chevron leak site.  It is quite small, covering about 2 square kilometers, and appears to be associated with Petrobras P38, an FPSO in the Marlim Sul field that recently began handling new production from platform P56:

This appears to be a very small spill — at 1 micron thick it would only amount to 528 gallons — but recent spills off Nigeria and affecting the beach at Tramandai in Brazil, should put FPSOs on everyone’s radar here in the US.

Mystery Slicks in Central Gulf – East Cameron South, Block 321
Scroll to top
SkyTruth and/or its third party tools use cookies to monitor traffic in the aggregate on our websites and applications and to improve user experience. If you continue browsing, we'll assume you agree to the use of cookies. You can change your cookie settings at any time in your browser settings. Find out more in our privacy policy.