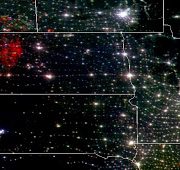 Our friends at NOAA’s National Geophysical Data Center provided us with this very interesting satellite image composite of the upper Midwest, made from nighttime satellite images collected by the U.S. Air Force’s Defense Meteorological Satellite Program.  State outlines are superimposed on the image:

Multiple cloud-free images collected over several years have been combined to make this picture:  1992 is shown in blue, 2000 in green, and 2010 in red.  Places that had lots of light in all three years show up bright white (equal amounts of blue, green and red) — that basically shows established cities and towns that haven’t changed much over that time period.

But whoa, check out that big patch of red in the northwest corner of North Dakota.  That indicates an area of bright lights in 2010 that was dark in 2000 and 1992.  What could this be?

Here’s a hint:  a map showing the extent of the red-hot Bakken Shale oil-drilling boom that got underway a few years ago. Oil is being produced from the Bakken by drilling and hydraulically fracturing (yes, that’s “fracking”) long horizontal wells, the same approach that is driving new drilling for oil and natural gas in the Haynesville, Fayetteville, Barnett, Marcellus, Utica, Niobrara and other hydrocarbon-rich shale formations around the country:

So why is this area all lit up at night?  Well, the rigs and other facilities are highly illuminated because drilling is a 24/7 proposition – time is money so there is no “down time.”

But there is another reason too: operators in this oil field are flaring off large quantities of natural gas.  That’s right, burning it off as a hazardous nuisance.  Meanwhile some folks on the campaign trail and on Capitol Hill complain loudly that environmental rules and government policies are limiting industry’s access to more public lands throughout America so they can drill for – you got it – natural gas. Despite the fact that industry is already sitting on thousands of approved drilling permits that remain idle, and millions of acres of leases they aren’t developing.

Yep, this makes my head hurt too.

So sit back and watch this spectacular time-lapse video shot by astronauts on the International Space Station for another view of this lit-up drilling area from space.  Go full screen for maximum enjoyment.  Maybe the stunning aurora borealis and flashes of lightning will make the headache go away…

Fire Extinguishes Itself at Chevron Blowout off Nigeria
Scroll to top