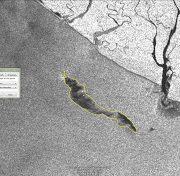 Teri noticed a small slick on today’s Envisat ASAR radar satellite image covering the site of Chevron’s blowout and fire off the coast of Nigeria. We measure it at about 18.6 kilometers long, extending about 39 square kilometers.  It appears to be very thin.  Assuming the slick is, on average, one micron thick, that amounts to about 9,500 gallons of some oily substance — possibly unburned natural gas condensate, since this was reported by Chevron to be a gas exploration well that was not creating any oil slick:

This MODIS image taken on February 3 (and this one from February 5) shows the ongoing fire where the KS Endeavor drill rig used to be, before it toppled over and sank: 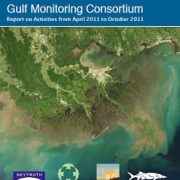 Back in April 2011, SkyTruth joined forces with SouthWings and Waterkeeper Alliance to coordinate our responses to oil pollution in the Gulf of Mexico.  Calling our partnership the Gulf Monitoring Consortium, we’ve worked by space, air and sea to investigate reports and rumors of pollution incidents.  Along the way we’ve identified spills not reported to Federal agencies, like this discharge from a platform along the Louisiana coast, and a leak from an offshore well in Breton Sound.  We’ve chronicled the continuous, ongoing leakage of oil from wells owned by Taylor Energy that were damaged by Hurricane Ivan more than seven years ago.  And we’ve looked into the continuing confusion surrounding the repeated sightings of oil near the Macondo well, source of the BP / Deepwater Horizon tragedy in 2010. 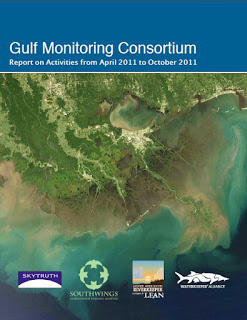 We’ve produced a brief report that summarizes the Consortium’s activity from April to October 2011, includes fact sheets on key investigations we’ve conducted, and discusses our findings so far, including:

We also estimate, based on our analysis of NRC reports, that as much as 2 million gallons of oil may have been spilled from October 2010 through September 2011 — nearly ten times more than reported by the polluters themselves. 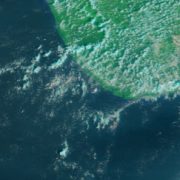 NASA/MODIS satellite imagery taken yesterday shows that the blowout and fire at a Chevron gas well off the coast of Nigeria continues.  That’s 20 days and counting.  It will take weeks to drill a relief well; according to Chevron the Transocean relief rig is on site, and drilling should begin soon.

Chevron “has moved food and supplies to the communities in the area to recognize the help and support that they have given the company.”

573 scientists, including renowned oceanographer and National Geographic explorer-in-residence Sylvia Earle, signed a letter just delivered to President Obama asking him to follow the recommendations of a 2011 US Geological Survey report to fill in gaps in our understanding of Arctic Ocean marine science, before allowing full-blown oil and gas drilling in the Beaufort and Chukchi Seas.

Shell and BP are two of the big players with big drilling plans for the Arctic.  Both have caused major oil spills recently, off Nigeria a few weeks ago and of course in our own Gulf of Mexico in 2010.