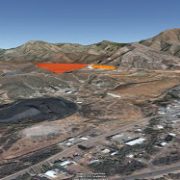 I’ve been recently asked to demonstrate the visual impacts of some potential wasterock dumps in Superior Arizona. We’ve acquired the plans for the wasterock dumps. The plans were drawn by Golder Associates in 2010 for Resolution Copper Mining, a company pushing for the privatization of public land for the purpose of copper mining. So we did a little bit of research and learned about the proposed Land Exchange and Conservation Act. With the approval of this Act, Resolution Copper Mining will swap a portion of their private land in exchange for public property, including Oak Flat and Apache Leap. This land was set aside for public use by President Eisenhower in the 1950’s. It has become a well known place for climbing, hiking, and camping and is considered sacred by the local tribes. Anti-mining groups believe that the mining operation will likely destroy much of the area. It will also generate huge volumes of wasterock– earth and rock that is removed to get to the copper ore. Resolution is proposing to build a giant storage impoundment just north of town, to hold the wasterock.

Based on these plans, I have rendered a 3D model of the large (permanent) and intermediate (temporary) wasterock dumps using Google Sketchup. I then placed them in Google Earth. We’ve created an image gallery, illustrating how large the wasterock dumps are and what they might look like from various perspectives in town.

Hydrogen Cyanide….It Isn’t Just for Delaware City Refinery Anym...
Scroll to top
SkyTruth and/or its third party tools use cookies to monitor traffic in the aggregate on our websites and applications and to improve user experience. If you continue browsing, we'll assume you agree to the use of cookies. You can change your cookie settings at any time in your browser settings. Find out more in our privacy policy.