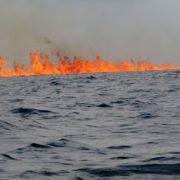 Chevron’s gas-well blowout in the Funiwa field off Nigeria continues to burn as efforts are underway to drill a relief well.

This Envisat ASAR satellite radar image taken today (February 27) shows a small slick apparently emanating from the site where the doomed KS Endeavor rig was drilling. We’ve seen a small slick repeatedly at this area since the blowout occurred.  Possibly there are some petroleum liquids coming up with the gas, and not completely burning off.  The slick on today’s image is about 10 miles long: 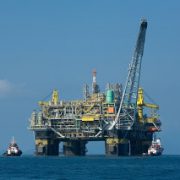 An Envisat ASAR radar satellite image taken on February 23, 2012 shows a small slick apparently emanating from Platform P-51 in the Marlim Sul field of the Campos Basin, about 70 miles offshore:

Covering 10 square kilometers, this slick represents a spill of about 2600 gallons, assuming an average oil slick thickness of 1 micron. 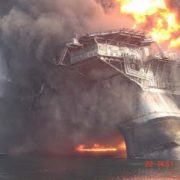 The federal trial to determine accountability and penalties for the BP / Deepwater Horizon oil and gas disaster in the Gulf of Mexico was set to begin in New Orleans this morning, but has been delayed by one week to allow more time for BP, the feds, and other stakeholders to reach a settlement.

We appreciate that the many businesses and families harmed by this massive industrial accident may want to receive compensation sooner rather than later. A trial and the inevitable appeals would likely stretch on for years, with the outcome uncertain.

On the other hand, a quick settlement is the best outcome for BP, because they may avoid having to pay the higher $4,300-per-barrel-spilled fine for “gross negligence,” and would only face the much lower automatic fine of $1,100 per barrel.  Given a total spill of 172 million gallons (4.1 million barrels), that’s a very big difference: $4.5 billion instead of $17.6 billion.  Even a company as large as BP, which earned profits of $23.9 billion in 2011, would feel some pain from the gross negligence fine.  And unless they feel real pain, the offshore drilling industry is likely to continue doing business as usual, making another massive deepwater spill a near certainty.

More important than meting out sufficient punishment: there is bipartisan legislation in play called the RESTORE Act that would specifically allocate 80% of the fine to the Gulf states affected by the spill, rather than the general treasury. We assume (optimistically) much of the money would be used by those states to fund social, economic and ecosystem revitalization projects.  If the Act does get passed by Congress, the additional $13.1 billion yielded by a determination of gross negligence could make a huge difference to Gulf communities.

Most interesting to us: if settlement talks fail and this case goes to trial, we expect federal prosecutors will attempt to paint BP as a “rogue” operator that took unusual risks, to convince the judge that the spill resulted from gross negligence.  BP, to defend itself, will likely claim that their operations, well design, and decisionmaking were not so unusual, and were consistent with industry-wide practices.  To make that case BP will have to present lots of information about the offshore drilling industry as a whole, including the safety record, accidents and near-misses experienced by other companies that we never hear about.  None of the official investigations of the BP / Deepwater Horizon spill looked at the industrywide record, leaving many of us wondering:

A trial may be the only way to answer that question, so we can make better-informed decisions that minimize the likelihood and impact of the next big spill as industry moves steadily forward with deepwater drilling.

We applaud the Pennsylvania DEP after reading the report yesterday on Gantdaily.com‘s website which stated that Catalyst Energy, Inc. has been fined $185,000 for water contamination, erosion violations and spills. Oh my!

It should be noted that these violations occurred at Catalyst’s non-Marcellus oil and gas drilling sites in Forest, McKean and Warren Counties in Pennsylvania. In Forest County, there were 14 incidents of water contamination, with water samples showing higher levels of iron, manganese and methane than in samples taken prior to the start of drilling in those areas. Sloppy, sloppy.

Read the article to see what other fun things occurred at Catalyst’s sites, and tell us what you think. Is enough being done? Should there be more controls put in place? 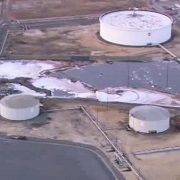 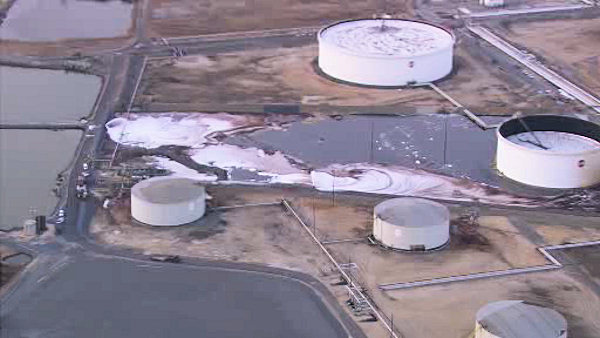 According to a report from the West Deptford Patch, 6.6 million gallons of crude oil spilled into an emergency containment area, but the DEP reports that there is no major health or environmental risks associated with the spill. 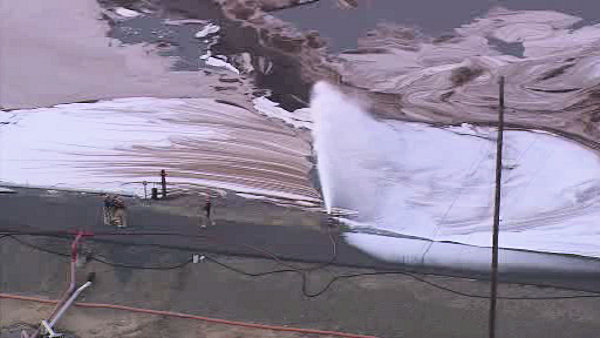 Workers sprayed the oil with foam after the spill occurred yesterday, however due to the rain in the South Jersey area overnight, the foam broke up and the smell is back and has drifted over the river to Marcus Hook, PA. This news report from WPVI-Channel 6 in Philadelphia shows aerial footage taken yesterday in a flyover by their HD camera on Chopper 6. In the footage you can see the foam being sprayed over the spill. Channel 6 reports 6.3 million gallons spilled. 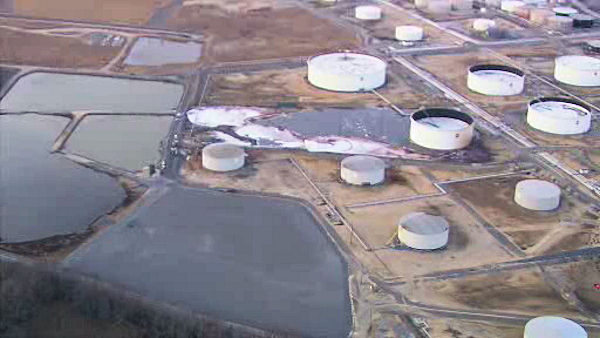 The Gloucester County Times reports that yesterday’s leak stemmed from a broken pipe on a containment tank that has the capacity to hold 12 million gallons. The fuel odor can be detected as far south as Baltimore County, Maryland, according to this recent report by the Park Overlea Patch.