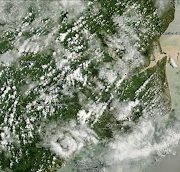 Tragedy struck southeastern Brazil when heavy, persistent rain lead to a landslide that killed at least 13 people near Jamapará in Rio de Janeiro state. This is a distressingly persistent problem in Brazil, where landslides triggered by torrential rains one year ago killed nearly 1,000. We hope the rains ease off and give the people a break.

This MODIS satellite image taken on January 12 shows cloud cover lingering over much of the region.  But a patch of brown coloration in the Atlantic Ocean along the coast near Campos is a sign of the tumult more than 100 miles inland: it’s caused by sediment-laden discharge of the rain-swollen Paraiba River, which flows past the site of the landslide and through the city of Campos in its way to the sea.

Chevron Drill Rig on Fire, Offshore Nigeria
Scroll to top
SkyTruth and/or its third party tools use cookies to monitor traffic in the aggregate on our websites and applications and to improve user experience. If you continue browsing, we'll assume you agree to the use of cookies. You can change your cookie settings at any time in your browser settings. Find out more in our privacy policy.