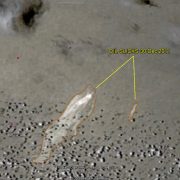 SkyTruth staff and volunteers have been looking pretty hard at the offshore oil producing areas along the coast of Brazil since Chevron’s spill from the Frade field in the Campos Basin, caused when they lost control of a new well being drilled in deepwater back in November.  That well had to be plugged and abandoned.  But there is a lot going on in Brazil’s waters, and there are other sources of oil pollution apparent on radar satellite images taken on November 25 and December 6.

Teri  noticed that this NASA/MODIS image from December 30, 2011, shows a moderate-sized apparent oil slick (with a much smaller companion nearby) in deepwater about 225 kilometers offshore.  It doesn’t have the shape we usually associate with bilge-dumping from a passing vessel; this looks more like the slicks formed by leaks at depth, or from a stationary point source. The slicks cover about 260 square kilometers.  We calculate they hold at least 68,000 gallons:

(maps after the jump)

This is far out on the edge of deepwater activity in Brazil, so we’re not sure what could be the source. The maps below give the context for these slicks.  Actively producing offshore fields are outlined in green; colored dots show exploration and production wells; and yellow rig icons show the locations where rigs were drilling in 2011, based on data we downloaded from ANP yesterday.  These data show no rigs in the vicinity, and the nearest well is an exploration well (purple dots) about 17 km from what we infer to be the source end of the larger slick:

Drilling Alerts: SkyTruth Kicks It Up a Notch for 2012!
Scroll to top
SkyTruth and/or its third party tools use cookies to monitor traffic in the aggregate on our websites and applications and to improve user experience. If you continue browsing, we'll assume you agree to the use of cookies. You can change your cookie settings at any time in your browser settings. Find out more in our privacy policy.