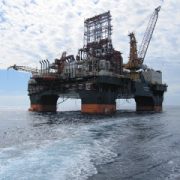 The Scarabeo-9, a big semisubmersible drill rig owned by Italian company ENI, just built in China, and currently under contract to the Spanish oil company Repsol, has arrived in the Florida Straits off the north coast of Cuba to begin exploratory oil drilling.  The rig will begin its work in exploration block N27 (see map after the jump) just 90 miles from Key West, in water about 6,500′ deep.  That’s 1,500′ deeper than the site of the BP / Deepwater Horizon spill in the Gulf in 2010.

[More after the jump…]

The rig passed an informal US inspection while it stopped over in Trinidad on its trip here from China, and Repsol has voluntarily agreed to comply with to US “environmental requirements” related to offshore drilling (whatever that means).  But Floridians are concerned that should a major spill occur, wind and current could push oil into US waters and potentially on to southern Florida islands and beaches that dodged a bullet during the BP / Deepwater Horizon spill.

Making matters worse, the US trade embargo against Cuba prohibits US spill-response companies and oil companies from providing assistance unless they’ve received a special license from the State Department.  Only a few firms have been licensed at this point — representing only about 5% of the spill-response capacity that was thrown, with minimal effect, at the BP / Deepwater Horizon spill — but that’s not going to stop the Scarabeo-9 from making hole.

On the hook for a rig-rental fee of more than $500,000 per day, Repsol is unlikely to keep the Scarabeo idle while we get our act together.  Time is big money in this capital-intensive business.

We’ll be monitoring this area, too, using satellite images.  We’ll publish here when we get our first image showing the rig on location.

Brazil Suffers Another Oil Spill – Another Warning Shot For FPSOs?
Scroll to top
SkyTruth and/or its third party tools use cookies to monitor traffic in the aggregate on our websites and applications and to improve user experience. If you continue browsing, we'll assume you agree to the use of cookies. You can change your cookie settings at any time in your browser settings. Find out more in our privacy policy.