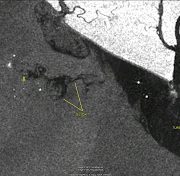 The K.S. Endeavor jackup drill rig operated for Chevron in shallow water about 5 miles off the coast of the Niger Delta is continuing to burn.  This blowout probably won’t be under control until a relief well can be drilled. Chevron confirms the rig had been drilling a gas exploration well they call the Funiwa Deep-A, with a planned depth of 16,500 feet.  But the well had only reached a depth of 12,945′ when the blowout occurred early Monday morning.  That’s comparable to the depth of BP’s Macondo well that blew out in the Gulf of Mexico in 2010, launching what would become the world’s worst accidental oil spill.

The Funiwa field has both oil and gas reservoirs.  A big question on everyone’s mind:  Could this lead to a major oil spill?  Is there a lot of oil already coming out of the well right now, fueling this blowtorch of a fire?  Some have reported sighting slicks and sheen in the vicinity.

Satellite imagery gives us some reason for optimism so far.  This Envisat ASAR radar satellite image taken today shows only a very small slick around what we infer to be the location of the burning Endeavor, based on multiple observations of the fire itself on MODIS 7-2-1 satellite images and the bright spots on the radar image that indicate big hunks of metal out in the water (rigs, vessels, platforms):

[More images and analysis after the jump…]

But if most of the oil is being burned up, won’t extinguishing the fire lead to a major oil spill like it did in the Gulf of Mexico in 2010?  Again, satellite images give us some hope that there is not much crude oil involved in this blowout.  MODIS satellite images show is what’s happening at visible to infrared wavelengths.  A MODIS/Aqua image taken yesterday shows the burning rig and the plume of smoke it’s generating. Here’s the 7-2-1 infrared composite, clearly showing the burning rig as a large red spot emitting strongly at mid-infrared wavelengths:

Here’s the same image shown in true color. The visible wavelengths are best for seeing the smoke plume, which is about 50 miles long, blowing to the west away from land. The smoke is very white, suggesting fairly clean combustion that you might expect from gas and gas condensate with little crude oil.

Compare this with the MODIS true color images from Aqua and Terra showing the smoke plume from the burning Deepwater Horizon rig in the Gulf on April 21, 2010; it’s longer and more persistent, and is obviously brownish in color — possibly because of cooler, less complete combustion due to the high crude-oil content of the BP blowout.  If this does indeed mean there is little crude oil coming from the failed Funiwa Deep-A well then we may not see a major oil spill.  But until the well is under control, there is always the risk that the situation could change; this deep well probably penetrated several shallower gas- and oil-bearing zones that might come into play if the well’s casing string becomes compromised by the violent expulsion of gas and condensate under high pressure.

By the way, the Funiwa field has some sad history: back in 1980 the Funiwa-5 well blew out, spewing some 8.4 million gallons of oil into the Atlantic Ocean here and entering the hall of infamy as one of the largest accidental oil spills ever. Human intervention didn’t stop that spill; eventually the well collapsed on itself (“bridged over”), shutting off the flow.

Drilling to Begin Soon in Deep Water Off Cuba
Scroll to top
SkyTruth and/or its third party tools use cookies to monitor traffic in the aggregate on our websites and applications and to improve user experience. If you continue browsing, we'll assume you agree to the use of cookies. You can change your cookie settings at any time in your browser settings. Find out more in our privacy policy.