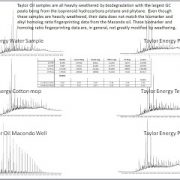 Back on September 15, a team from National Wildlife Federation piled onto a small boat on the Louisiana coast.  Their destination: the chronic leak site about 12 miles offshore where a cluster of wells operated by Taylor Energy has been steadily spilling oil into the Gulf since 2004.  Check out this aerial video of the site, shot by On Wings of Care on December 9, 2011:

Their objective: to collect samples of the Taylor oil slick for analysis, to see if it’s chemically distinguishable from the oil that gushed from BP’s infamous Macondo well about 30 miles away.  We wanted to know if other samples of oil collected in this region of the Gulf, on beaches and barrier islands and from slicks observed offshore, could possibly be coming from the Taylor site since it’s a well-documented source of oil pollution. The NWF team — coached in advance by Dr. Ed Overton at Louisiana State University on proper collection and sampling technique — succeeded. Dr. Overton analyzed the Taylor oil samples and in mid-October told us “these were heavily weathered oil with slight differences in the fingerprint pattern from the Macondo oil.”  (more after the jump….)

Elaborating on this a few days later, Dr. Overton said “the biomarker fingerprint is very similar but it does have significant differences especially in the 218 and 231 ion plots.  Also, the C2DBT/C2Ph and C3DBT/C3Ph ratios are not consistent with Macondo oil.  The sample we got from Ben Raines [of a small slick one mile from the Macondo well location] was very fresh with almost no weathering while the Taylor samples were all pretty heavily weathered with almost no normal hydrocarbons left in the GC data.  So, if you know what you are doing, you should be able to distinguish between Taylor sheens and other samples especially of the Macondo oils.  We really need samples of nearby seep oils and sheens from these seeps to get a full picture but so far, we have been able to fingerprint the Macondo oil fairly accurately (at least in my opinion).”

Here is a graphic Dr. Overton provided us yesterday, illustrating the difference in “weathering” of the Taylor oil samples from NWF compared with fresh Macondo oil samples taken directly from the riser pipe that connected the Macondo well with the Deepwater Horizon platform.  Dr. Overton said “While the data shown in the plots are not from the fingerprinting, these plots clearly show how much the Taylor samples were weathered compared to the Macondo Riser oil.  Getting good samples of all the slicks is a very daunting task because it requires close collaboration between surface sampling vessels and airborne observation. None the less, we still do not have good samples from sheens in the vicinity of the Macondo well.”

The upshot:  oil leaking from the Taylor site should not easily be confused with relatively unweathered oil from the Macondo disaster.  But it would be very helpful to collect more and better samples from the slicks being observed in the vicinity of the Macondo well site.
Eventually, as residual Macondo oil gets older and more highly weathered it will become more difficult to differentiate it from Taylor oil.
https://skytruth.org/wp-content/uploads/2011/12/SkyTruth-LSU-Taylor-analysis.jpg 240 320 John Amos https://skytruth.org/wp-content/uploads/2020/11/SkyTruth-Header-Logo-C.png John Amos2011-12-16 15:44:002019-02-22 11:01:24Taylor / 23051 Chronic Leak Site in Gulf: Oil Analyzed