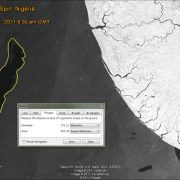 Royal Dutch Shell’s Nigerian drilling operations in the highly productive Bonga Field were officially brought to a halt yesterday after “less than 40,000 barrels of oil” (1.7 million gallons) were reportedly leaked during a transfer of crude to a tanker. We’ve just processed a radar satellite image taken this morning (December 21, 2011) of the field, with the spill clearly visible.  Here it is showing the slick outlined in yellow; it is about 70 km (45 miles) long, 17 km (10 miles) wide at it’s widest, and covers 923 square kilometers (356 square miles) of ocean: 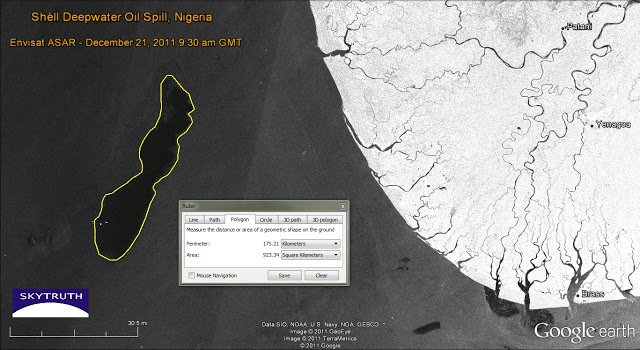 Another, much smaller oil slick appears at lower right; this looks like a bilge dump from a passing vessel, not related to the Shell spill.

Located 120 km off the the Nigerian coast, the Bonga Field is the first deepwater oil exploration and production project for the country since Shell began offshore drilling there in 2005. Shell’s onshore operations in the Delta have a long history of spills.

Shell Oil Spill, Nigeria: FPSOs Coming to the US
Scroll to top