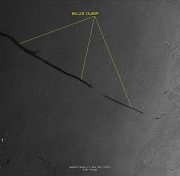 After flying journalists over the remnants of the Bonga FPSO oil spill off Nigeria,Shell pointed out that they are not the only polluters in this part of the world, and will clean up another small spill in the area not related to any of their operations.

That certainly doesn’t excuse their (much larger) mess but they are correct:  satellite images of the west coast of Africa, like some other coastal regions around the world, routinely show signs of oil pollution from other sources, especially bilge-dumping by vessels large and small. We don’t know if it’s legal in this area; it is not legal in US or Canadian waters. Radar satellite imagery is an excellent tool for detecting bilge-dumping.

This Envisat ASAR image taken on December 18, 2011 shows a 100-mile-long slick caused by bilge dumping from a large vessel that was traveling toward the southeast on a course taking it very close to the Bonga FPSO (we’ve inferred the location of the FPSO from multiple radar satellite images; if anyone has the exact lat/lon coordinates please pass them along to us):

At 1 micron thick this bilge slick holds about 80,000 gallons of oily material.  Projecting the vessel track back to the northwest, we land near the city of Aneho on the Togo coast. There is an industrial facility in the area that appears to have an offshore loading system.  It could be the point of origin for the suspect vessel, but we really have no way of knowing:

Here’s what it looks like in Google Maps.  Does anyone have any information about this facility?

Pebble Mine Plan Superimposed on Washington, DC
Scroll to top
SkyTruth and/or its third party tools use cookies to monitor traffic in the aggregate on our websites and applications and to improve user experience. If you continue browsing, we'll assume you agree to the use of cookies. You can change your cookie settings at any time in your browser settings. Find out more in our privacy policy.