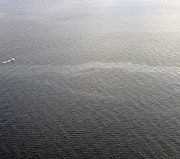 Jon Henderson of Gulf Restoration Network did an overflight over the Gulf yesterday, thanks to our Gulf Monitoring Consortium partner SouthWings. They documented two small slicks in Breton Sound, and a larger slicks from the Taylor Energy site where a cluster of hurricane-damaged wells have been leaking since 2004.  Read all about it and check out the excellent pics.

Jon filed three reports with the National Response Center, as all citizens who witness a suspected oil or hazardous materials spill are encouraged to do.  His reports should appear soon in the SkyTruth Alerts system, which you can subscribe to if you’d like to get automatic notifications any time a spill is reported. But in the meantime you can see Jon’s two Breton Sound reports here and here, and the Taylor report here.

Judging from the pics, it looks like both Breton Sound slicks are being caused by a slow point source of leakage underwater, probably on the seafloor.  The first is similar to what you’d see at a natural oil seep location; the second contains heavier brown material that suggests a larger/faster leak.  Given the maze of pipelines and abandoned wells on the seafloor in the Sound, both might be from leaking infrastructure.  We’ll check the NRC to see if any potential responsible party has come forward.

The slick at the Taylor Energy / 23051 site is similar to what we’ve been seeing since we first “discovered” this chronic leak in early 2010. A work boat of some kind is on the scene, but the Ocean Saratoga rig that was working to plug the leaking wells is obviously not. Apparently fixing these wells and stopping this leak isn’t a high priority. Check out a chronology of information and observations related to this leak. You can monitor this location on the SkyTruth Alerts, or subscribe to get automatic notifications.