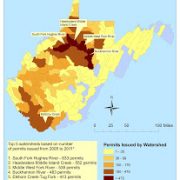 Although most of the recent natural gas drilling coverage has centered around the Marcellus Shale play in Pennsylvania, West Virginia has never been out of the loop when it comes to energy resource extraction.

Oil, natural gas and coal bed methane industries have quietly grown alongside the long-entrenched coal business in the state, but as production ramps up across the nation, West Virginia’s natural gas drilling is drawing increased attention.

(maps and more after the jump)

SkyTruth downloaded and analyzed data from West Virginia’s Department of Environmental Protection to create the maps below. Each show the extent and concentration of permits issued across the state between 2005 to 2011.  Note that a “permit” does not necessarily indicate that the well has been drilled, or fracking has taken place, but in the hot Marcellus Shale play we think it’s likely that action follows the permit approval more often than not, and quickly.

So, what effects will the rising gas  industry have on the state, especially in highly permitted areas like the Middle West Fork River watershed?  Unlike coal, natural gas drilling, especially that employing hydraulic fracturing methods, is relatively unexplored regulatory and environmental territory.

Although the industry may be decreasing unemployment in some localities, some citizens are worried that in the haste to drill proper environmental regulations have not been implemented to account for the risks and impacts associated with the new technologies of horizontal drilling and fracking.

Here in West Virginia concerned citizens have pushed the legislature to review the issue and the Senate Judiciary Committee just this week forwarded along a controversial set of rules dictating Marcellus regulation, but to what end? With strong industry players touting economic benefits and pushing against costly regulations, it will be interesting to see where West Virginia falls in the battle between profit and oversight.