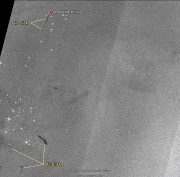 We’ve been getting a few Envisat ASAR radar satellite images of the Campos Basin off the coast of Brazil, covering the Frade field, where Chevron and their contractor Transocean experienced a loss of well control during drilling on November 7 that initiated an oil spill. Apparently “unexpected” reservoir pressure caused drilling mud to back up in the well, allowing highly pressurized oil (and probably some gas) to leak out into the surrounding bedrock.  This oil has since been working its way up to the seafloor through faults or fractures in the rock, emerging along a line of unnatural seeps on the seafloor, and floating up to the surface to create visible oil slicks.  The well was plugged a week after the spill began, and since then visible slicks have diminished in size.

Chevron may also be required by Brazilian authorities to drill a relief well to inject cement into the well at depth — an expensive proposition — to formally abandon the failed well.  And a Brazilian federal prosecutor based in Campos has filed a $10.8 billion suit against Chevron and Transocean, and is seeking to have both companies permanently banned from drilling in Brazil.

Meanwhile in Bohai Bay, China, ConocoPhillips has found little environmental damage from their spill earlier this year in the Peng Lai 19-3 field.  But they did reveal that their spill, like Chevron’s, was caused “due to unexpected pressure encountered while drilling.”  A mistake like that can lead to a blowout and major spill.  I hope all of the technical details from both of these incidents are being disclosed and will be made available to the public and to US regulators.

The radar satellite image above, taken on December 6, 2011, shows a very small slick originating near the location of Transocean’s SEDCO 706 drilling rig that was installing Chevron’s failed well. The slick is about 7.3 miles long and a few hundred yards wide, comparable to the slicks created by natural oil seeps in the Gulf of Mexico.  Wind conditions were good for slick detection at the time, blowing at about 10 knots (5 meters per second).  Several other small slicks are visible near a cluster of oil platforms (bright spots) about 50 miles south of the SEDCO 706.  This is within the southern Campos Basin, and these slicks may be the result of minor spills or leaks from platforms, pipelines, or vessels operating in one of the many offshore fields in the region.

Shelling out the Oil in Waters off Nigeria: Radar Satellite Image December 21,...
Scroll to top