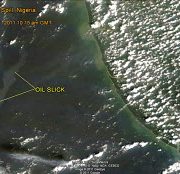 Less than an hour after Envisat captured a stunning radar image of Shell’s big oil slick off Nigeria, NASA’s MODIS satellite flew over.  The Terra instrument on MODIS took this visible-infrared image that also shows the oil spill peeking through the clouds and haze that typically obscure this part of the world:

The slick coincides exactly with the slick on the radar image – no surprise there – but it does appear slightly smaller. On this MODIS image, the slick is showing up as a spectral feature, a target with a distinct reflectance signature typical of floating oil (high reflectance at shorter wavelengths, making it appear pale blue-ish in color).  On a radar image, oil slicks are textural features: they smooth out the ocean surface, causing specular reflection of the incoming radar energy being beamed down at earth by the radar instrument. The very thin edges of the slick look transparent to MODIS but are still able to smooth out the water and appear dark on radar images under suitable wind conditions.  Scatterometer data show that the surface wind speed was probably in the 5 to 10 knot range, ideal for slick detection on radar.

Which brings us to the amount of oil spilled.  Shell has reported “less than 40,000 barrels” were spilled, so the amount could be anywhere from 1 gallon to 1.7 million gallons.  Based on the radar image today, the oil slick covers 923 square kilometers.  At an average thickness of 1 micron (1/1,000th of a millimeter) that would amount to 243,672 gallons (5,802 barrels) of oil.  But portions of the slick could be many times thicker than that; it’s not unusual for a spill directly to the sea surface to be millimeters, or even centimeters, thick.  Estimating the thickness is usually based on direct visual observations of the slick, especially the color.

It would be very helpful to get photos or video of this slick taken from the air and on the water.

Shell Oil Spill, Nigeria: FPSOs Coming to the US

Sunoco’s Ongoing Leak in South Philly
Scroll to top
SkyTruth and/or its third party tools use cookies to monitor traffic in the aggregate on our websites and applications and to improve user experience. If you continue browsing, we'll assume you agree to the use of cookies. You can change your cookie settings at any time in your browser settings. Find out more in our privacy policy.