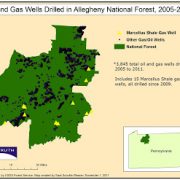 As part of SkyTruth’s ongoing analysis of gas and oil drilling in Pennsylvania (see HotSpot Map blog and Abandoned Wells blog) we’ve begun exploring the effects of the Marcellus play on national and state forests.

This issue has been of concern to environmentalists and residents alike for several years. In 2009 the U.S. Forest Service was sued by conservation groups for allowing gas drilling to continue without the completion of environmental site assessments of potential drilling effects. The case was ruled in favor of such assessments, but drilling companies and private mineral owners with stakes in the Allegheny were quick to appeal. In September, 2011 the settlement requiring environmental site assessments before drilling can begin was overturned, thus opening up the national forest for new gas and oil drilling, including horizontal drilling with hydraulic fracturing (fracking).

The map below illustrates drilling in Allegheny National Forest from January 2005 – October 2011:

Nearly 4,000 oil and gas wells were drilled in Allegheny National Forest since 2005.  Only 15 of those are Marcellus Shale wells, and all of them were drilled since 2009. As the concern about natural gas drilling in U.S. National Forests spreads, SkyTruth intends to continue monitoring the number of permits received by the PA DEP Bureau of Oil and Gas Management to see if this ruling will bring increased drilling activity in the area as expected.
https://skytruth.org/wp-content/uploads/2011/11/AlleghenyForest.jpg 247 320 Sara Scoville-Weaver /wp-content/uploads/2016/08/test_logo.png Sara Scoville-Weaver2011-11-02 19:28:002019-02-22 11:12:29U.S. National Forests No Match for Drilling Boom
2 replies

Oil from sand? You better believe it.
Scroll to top
SkyTruth and/or its third party tools use cookies to monitor traffic in the aggregate on our websites and applications and to improve user experience. If you continue browsing, we'll assume you agree to the use of cookies. You can change your cookie settings at any time in your browser settings. Find out more in our privacy policy.