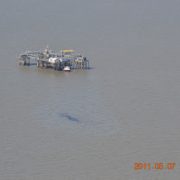 Thought you all would like to (finally) see photos taken during the very first official action of the Gulf Monitoring Consortium back in May of this year. SouthWings pilot Dan Luke flew along the Gulf coast to investigate possible leaks from oil and gas infrastructure in western Louisiana, from Vermilion Bay to Sabine Pass.  About 37 miles east of Grand Chenier, passenger Jamie Ward took a series of photos showing an apparent discharge of oily material from a platform about a mile offshore:

We haven’t been able to find any report for this incident at the National Response Center.  It’s our understanding that any discharges or leaks that create a visible oily sheen on the water must be reported to the NRC by the responsible party.

This isn’t the only spill we’ve stumbled across where there was no report by the responsible party; later that summer, in another Gulf Monitoring Consortium investigation, Jon Henderson documented (photos and video) a long oil slick emanating from a wellhead in Breton Sound.

Why is this interesting? Well, it makes us wonder:  how many other leaks and spills are simply going unreported in the Gulf?  If 2 out of 5 Gulf Monitoring Consortium actions discovered unreported spills, it raises the possibility that this could be a very large problem.  Maybe the spills weren’t reported simply because no personnel from the responsible company were on site to notice a problem.  But that’s troubling because the vast majority of the 3,600 or so actively producing oil and gas platforms and other structures in the Gulf aren’t occupied.  What you can’t see, you can’t report.  Which means that we really don’t have any idea how much pollution is caused by day-to-day offshore oil and gas operations.

And that’s a real problem – not just for the Gulf and for restoring the natural resources that support the fishing, seafood and tourism industries – but for folks in other parts of the country, like Alaska and Virginia and North Carolina who are being asked to support the expansion of offshore drilling to their coasts.

Alberta Tar Sands – It’s Not Just About the Mining

Fire Reported in Gulf of Mexico – Part Deux?
Scroll to top
SkyTruth and/or its third party tools use cookies to monitor traffic in the aggregate on our websites and applications and to improve user experience. If you continue browsing, we'll assume you agree to the use of cookies. You can change your cookie settings at any time in your browser settings. Find out more in our privacy policy.