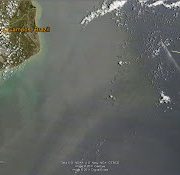 We don’t have much information on this yet but Chevron is reporting an oil spill in their Frade field in the Campos Basin off Brazil.  Two MODIS satellite images from NASA, taken yesterday, show an apparent oil slick about 35 miles long and covering about 180 square kilometers, 80 miles offshore due east of the city of Campos. Assuming this slick is only one micron (1/1000th of a millimeter) thick, then it represents about 47,000 gallons.

This Terra image, shot at about 1 pm local time on November 9, has a sunglint pattern over the area that reveals the slick as a bright streak. At first we just thought it was a bank of clouds until we noticed it didn’t cast any shadow, like the other clouds in the area:

And this Aqua image taken a couple of hours later clinched it as a slick: the sun angle has changed enough so the sunglint pattern has moved, and the slick now appears mostly dark.  It’s in the same place, but the clouds have all changed dramatically compared with the Aqua image:

The slick seems to be originating from a continuous point source of leakage at its north end.  It also looks thicker at the north end, as you’d expect – it’s brighter there on the MODIS/Aqua image suggesting the slick is thick enough to have its own distinct spectral response, not just a sunglint signature.  We hope they get the source of this under control soon.

“Fracking Pit” Spill Reported near Salem, West Virginia
Scroll to top
SkyTruth and/or its third party tools use cookies to monitor traffic in the aggregate on our websites and applications and to improve user experience. If you continue browsing, we'll assume you agree to the use of cookies. You can change your cookie settings at any time in your browser settings. Find out more in our privacy policy.